Kaesong companies haven’t given up hope

Kaesong companies haven’t given up hope 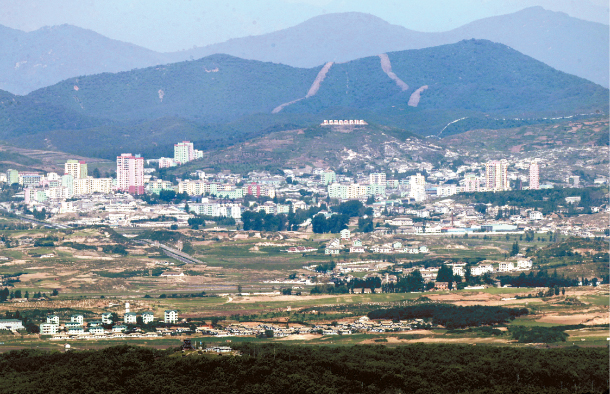 Kaesong Industrial Complex is seen from the border town in Paju, Gyeonggi, on Monday. Even though Donald Trump canceled the scheduled June 12 summit with North Korean leader Kim Jong-un, companies with manufacturing facilities in the complex are upbeat about the prospect of resuming operations there. [YONHAP]

Despite U.S. President Donald Trump’s decision to call off a June summit with North Korean leader Kim Jong-un, local companies with factories in the Kaesong Industrial Complex remain optimistic and plan to continue their efforts to return to the site one day.

“The announcement was deeply regrettable but we think there’s still room to believe that the United States and North Korea will eventually have their meeting,” said Kim Seo-jin, the managing director of the Corporate Association of Kaesong Industrial Complex.

“We’re trying to stay away from being swayed by day-to-day announcements and continue our preparations as we have so far,” said Kim. “Our plan was to request a visit to Kaesong according to the result of the U.S.-North Korea summit but in the current situation, I think it will be hard for the government to do much on that matter.”

The 110 or so South Korean companies that used to operate in Kaesong have been optimistic that their fortunes were about to change since the Panmunjom Declaration on April 27. It’s been more than two years since the Park Geun-hye government abruptly closed the site without allowing manufacturers to retrieve their equipment.

The announcement of the U.S.-North Korea summit only heightened expectations among Kaesong businesses.

“The internal opinion among the companies is to wait and see for now,” said Yoo Chang-geun, who leads the association’s task force for the Kaesong Industrial Complex’s normalization. “The disappointment is pretty big because some of us thought we may be able to visit the site after the summit.”

Yoo is also the chairman of SJTech, an electronics and car component manufacturer that was one of the first local companies to establish a factory in Kaesong. His company was hit especially hard by the shutdown and was forced to cut orders due to the sudden reduction in its manufacturing capacity.

“I hope we can revisit the site as soon as possible to check on the facilities,” said Yoo. “The sooner we know the state the facilities are in, the sooner we know how much time it will take to resume production after economic exchanges start. It’s based on this information that clients can regain trust and place orders in the future.”

The association claims that the companies involved in the Kaesong complex have now lost an accumulated 1.5 trillion won ($1.39 billion). In the last two years, they have asked the government to give them permission to visit the site, but all five attempts have been turned down.

Hyundai has the largest stake among local conglomerates regarding business in North Korea. Its affiliate, Hyundai Asan, used to operate tours to Mount Kumgang before a tourist was shot by a North Korean soldier in 2008. Hyundai also overlooked the operation of the Kaesong Industrial Complex, although the group does not have any manufacturing facilities there.

“It’s a pity the summit was called off, but the news itself didn’t cause much of a stir inside the company - we’ve seen summits with North Korea before; it was never easy,” said a Hyundai Group spokesman. “The plan is to calmly keep up with what we’ve been doing, including the task force.”

Earlier this month, Hyundai established a task force dedicated to restarting economic exchanges between the two Koreas. Composed of researchers and company insiders from various fields, the team is led by Hyundai Chairwoman Hyun Jeong-eun herself.