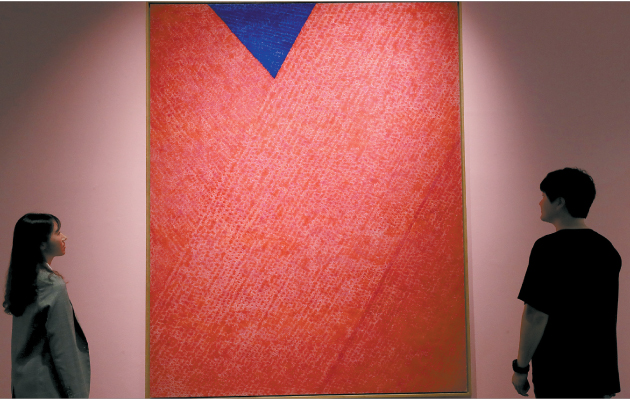 The work became the most expensive piece of Korean modern art ever auctioned, as it fetched 62 million Hong Kong dollars ($7.9 million) Sunday afternoon at the Korean auctioneer’s sale at the Grand Hyatt Hong Kong.

The top six Korean modern and contemporary art pieces ever auctioned are now all dot paintings by Kim (1913-74). The large abstract paintings filled with numerous dots created by Kim during his New York period (1963-74) are regarded by art historians as the peak of the artist’s oeuvre.

“This work ‘03-II-72 #220’ is a rare dot painting whose main tone is red; most of Kim’s dot paintings have blue tones,” Seoul Auction said in a statement. “In addition, it gives a very dynamic impression, as the red tone clashes with blue color in the small triangle.” [YONHAP]