‘Bungee Jumping of Their Own’ returns to the stage

‘Bungee Jumping of Their Own’ returns to the stage 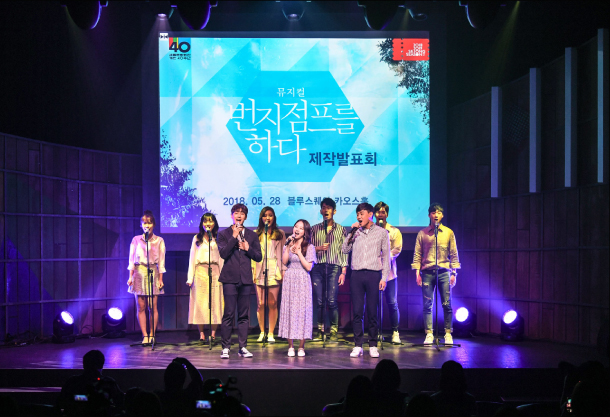 For the first time in five years, “Bungee Jumping of Their Own” is returning to local theaters. Familiar faces Kim Ji-hyun and Kang Pil-suk will be playing the roles of Tae-hui and In-u. [SEJONG CENTER FOR THE PERFORMING ARTS]

Falling in love while standing in the rain may seem like a trite theme often seen in literature and entertainment, but it still remains a romantic situation found in many stories.

This seems to be the case in director Kim Dae-seung’s hit romance film “Bungee Jumping of Their Own” (2001), which centers on the theme of first love and revolves around the relationship of Tae-hui (Lee Eun-ju) and In-u (Lee Byung-hun).

The two become a couple shortly after Tae-hui suddenly appears under In-u’s umbrella as he is walking and captivates his heart. Years later, In-u still cherishes this memory, as Tae-hui was his first love.

Because of the movie’s popularity, it was adapted into a musical of the same name in 2012. Due to the success of the original run, the musical was brought back a year later.

The Musical magazine ranked “Bungee Jumping of Their Own” first on its list of “most anticipated musical reproductions” in 2013. The upcoming production will run from June 12 to Aug. 26 at the Sejong Center for the Performing Arts’ M Theater.

Actors Kim Ji-hyun and Kang Pil-suk will be reprising their roles as Tae-hui and In-u once again, while actor Lee Ji-hoon will also be playing the role of In-u.

Initially, Lee was concerned that he would be too old to play a character reminiscing about his first love, but he realized that “it would be even harder for someone to play this role without having lots of [romantic] experience.”

The show’s music works to highlight the romantic emotions between the characters. “The music gives off an impression of polished refinement, which can be enjoyed by audiences [of all ages],” said musical director Joo So-yeon.

All-time favorites, such as “My Everything” and “Memories,” appear once again in the musical.

Along with its soulful score, the production also puts an emphasis on dialogue. “Some of the [lines] were modified to suit the times,” said the musical’s director Kim Min-jung, who noted that some scenes between the male classmates in the show were amended because the dialogue could be seen as inappropriate to today’s audiences due to the ongoing wave of feminism.

“[Seventeen] years have passed since the movie’s release, so we modified the dialogue accordingly to meet the [changes in attitudes,]” said Kim.