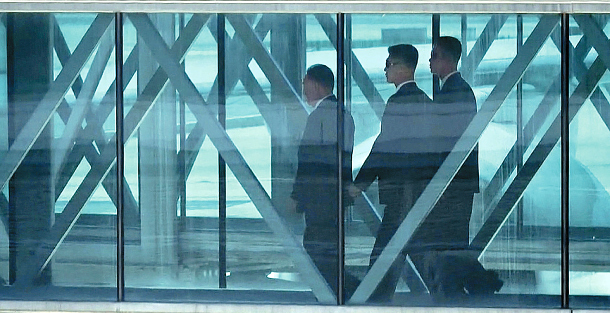 Kim Yong-chol, the highest-ranking North Korean official to visit the United States in 18 years, was set to meet U.S. Secretary of State Mike Pompeo in New York, their third meeting in two months, to finalize a first summit between the two countries.

Pompeo was scheduled to be in New York Wednesday and Thursday, according to the U.S. State Department, to meet with Kim, a vice chairman of the North’s ruling Workers’ Party Central Committee, and prepare for a summit between U.S. President Donald Trump and North Korean leader Kim Jong-un to be held on June 12.

In a dizzying turnaround less than a week after Trump announced the cancellation of the summit, Kim, the director of North Korea’s United Front Department, which is responsible for inter-Korean relations, departed for New York from Beijing Wednesday.

Kim flew from Pyongyang to Beijing Tuesday with North Korean officials including Choe Kang-il, acting director general for North American affairs in its Foreign Ministry, and Kim Song-hye, a senior official from the Propaganda and Agitation Department of the Workers’ Party.

“Since the president’s May 24 letter to North Korean leader Kim Jong-un, the North Koreans have been engaging with the United States,” said Heather Nauert, spokesperson of the U.S. State Department, in another briefing Tuesday. “The United States continues to actively prepare for President Trump’s expected summit with leader Kim in Singapore.”

She referred to Trump’s abrupt cancellation of the June 12 summit with the North through an open letter addressed to Kim Jong-un issued on May 24, in response to bellicose rhetoric coming from Pyongyang’s Foreign Ministry, and a subsequent series of preparatory meetings since.

Asked whether the Kim-Trump summit will still be held on June 12 in Singapore, Nauert said, “That is what we’re planning for,” and, like the White House, affirmed that Washington will “certainly be prepared” even if for some reason it “takes place at a later date.”

Kim Yong-chol will meet with Pompeo “later this week,” she said, adding that the secretary “looks forward to his meetings.”

Jo Myong-rok, a vice marshal of the People’s Army and a special envoy of late North Korean leader Kim Jong-il, paid a rare visit to the United States to meet President Bill Clinton at the White House in October 2000 to help pave the way for a summit between the two leaders. At that time, Jo was dressed in full military regalia when he gave Clinton a personal letter from then-leader Kim.

He invited Secretary of State Madeleine Albright to Pyongyang, and she made a return visit later that month. But a North-U.S. leaders’ summit did not come about, and U.S. President George W. Bush took office in January 2001.

Pompeo, as director of the Central Intelligence Agency, made a surprise visit to Pyongyang at the beginning of April, where he met with leader Kim, and took a follow-up trip on May 9, during which he secured the release of three Korean-American detainees. Kim’s visit to the United States has been anticipated as a key step toward finalizing summit preparations.

But former spy chief Kim has been sanctioned by the U.S. Treasury since 2010.

When asked whether a special waiver was needed for Kim to visit New York, Nauert replied, “Whatever was necessary was, in fact, done.” On whether Kim had also been approved to travel to a U.S. location other than New York, she said, “additional waivers” or “some sort of an approval” would be needed for that.

There is interest in whether Kim will meet with Trump in person to deliver a letter from the North Korean leader, leaving open the possibility that the four-star general may go to Washington with Pompeo.

However, Trump is scheduled for a rally in Texas Thursday. Nauert underscored that “it’s important that we’re going up to New York.”

She said the North Korean official are “traveling a really far distance,” adding, “I think it shows the importance of this meeting to look forward and look ahead to the planned meetings that the president would have with his counterpart in the future.”

When asked whether the Pompeo-Kim meeting will set an agenda or define what denuclearization means for each side, she replied, “This will be the Secretary’s third meeting with Kim Yong-chol.

“They’ve had obviously very deep conversations, where they’ve talked about a lot of detail about what the United States expectations are.

“I know the secretary looks forward to engaging him in New York,” she said.

The State Department confirmed that a U.S. delegation, including U.S. Ambassador to the Philippines Sung Kim - who was a former top nuclear envoy - Allison Hooker, director of Korea for the White House National Security Council, and Randall Schriver, assistant secretary of defense for Asian and Pacific Security Affairs at the Department of Defense, is meeting with a North Korean delegation in the truce village of Panmunjom at the inter-Korean border.

Their talks with North Korean Vice Foreign Minister Choe Son-hui at the Tongilgak building on the northern side of Panmunjom kicked off Sunday. Nauert said additional meetings were planned for later this week. The two sides reportedly took a break over Monday and Tuesday, but Kim’s delegation was spotted heading to Panmunjom Wednesday and talks resumed.

The two sides were expected to discuss North Korea’s denuclearization process and what sort of guarantees the United States is willing to offer for the regime, which will provide a framework for a summit next month.

“Separately, Joseph Hagin, the White House deputy chief of staff for operations, and the U.S. pre-advance team, including members from the State Department, are in Singapore this week, where they’re conducting logistics of the expected summit,” spokesperson Nauert added.

North Korea’s Kim Chang-son, director of the North’s State Affairs Commission Secretariat, considered equivalent to a chief of staff, and Hagin, both seasoned in arranging protocol matters, were reported to have held a meeting Tuesday. The North is seen to especially be concerned about security for its leader. Kim Chang-son, when asked by a Japanese reporter on Monday at the Beijing airport en route to Singapore, why he was traveling to Singapore replied, “To play.”