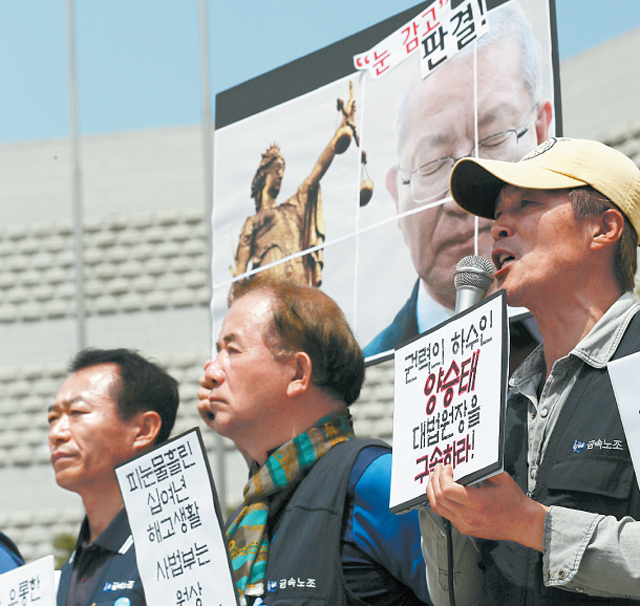 Members of the Korean Metal Workers’ Union protest outside the Supreme Court in southern Seoul on Wednesday. They called for a thorough investigation into former Chief Justice Yang Sung-tae, who is accused of influencing court decisions to curry favor with the former Park Geun-hye administration, and a retrial of their cases. [YONHAP]

The Supreme Court’s administrative body held a meeting on Wednesday to discuss allegations of power abuse by a former chief justice.

Yang Sung-tae, who served under disgraced President Park Geun-hye, faces a litany of accusations, including influencing decisions at the Supreme Court and even creating a blacklist of judges based on their political and ideological leanings.

The meeting, presided over by the National Court Administration’s deputy head, Kim Chang-bo, discussed whether to conduct an internal investigation into the allegations; whether to bring criminal charges against Yang; and whether some decisions by the Supreme Court need to be revisited.

Kim Meong-su, the current chief justice, said he would make a decision on whether to investigate Yang after hearing from other judges.

“Courts of all levels are hosting internal meetings regarding the allegations,” Kim told reporters on his way to work on Wednesday.

A special investigative team on Saturday announced the results of a yearlong investigation into practices at the Supreme Court when Yang served as the chief justice from 2011 to 2017.

The probe unearthed many documents written by the National Court Administration during Yang’s reign that raised concerns about violations of judicial independence. Some included directives to curry favor with the Park administration, such as, “Regarding cases that may have strong national or societal influences, or are about sensitive political issues, communicate with the Blue House unofficially, and in advance, to make sure that the Supreme Court does not dole out unexpected rulings.”

In Korea, the Supreme Court is in charge of most of the judicial system, and the chief justice has vast powers.

In March 2006, Korail decided to transfer attendants on its Saemaeul trains to KTX Tour & Leisure, a subsidiary. They had to continue doing the same work but as employees dispatched from the subsidiary. Korail said the attendants had been working for them on fixed-term contracts, not as full-time employees, so they could be transferred.

By May 2006, Korail had fired about 280 attendants who refused to be transferred to Korail’s subsidiary. A group of them filed a suit against Korail in October 2008, and the Seoul Central District Court ruled in December that year that the workers should be re-employed by Korail because they were initially hired under a contract by Korail and not another company. An appeals court doled out the same ruling.

The Supreme Court then remanded the decision in 2015, saying the workers were on fixed-term contracts at Korail and that the company was not bound by a contract to keep the workers as full-time employees at the company.

One of the former Korail workers involved in the case committed suicide shortly after the decision was announced.

The former Korail workers rallied outside the Supreme Court on Tuesday, demanding to see Chief Justice Kim. They disbanded in the afternoon after a meeting with Kim’s chief secretary was promised.

Other groups, including some members of the Korean Metal Workers’ Union, continued their rallies on Wednesday to demand their cases be similarly overturned.

“We met with the chief secretary today, and we demanded a thorough investigation into the overturning of the case at the Supreme Court in 2015, which ruined our lives,” Yang Han-woong, a former Korail worker, said at a news conference on Wednesday. “We request the Supreme Court come up with a specific compensation plan for each of the victims of the Supreme Court decision.”

Yang is also suspected of ordering the National Court Administration to create a list that classified judges according to their political and ideological leanings and monitor activities of judges who were not supportive of his leadership.

The special investigative team, however, decided not to request prosecutors investigate Yang on this allegation because there was no evidence that any of the judges targeted actually suffered disadvantages.