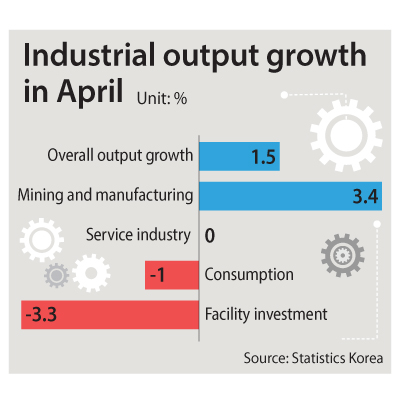 Korea’s industrial output rebounded in April from a month earlier on a rise in production in the chipmaking and automaking sectors, government data showed Thursday.

Production in the mining, manufacturing, gas and electricity industries rose 3.4 percent on-month in April, following an adjusted 2.2 percent on-month decline in the previous month, according to the data by Statistics Korea.

From a year earlier, industrial output gained 0.9 percent, from a 4 percent on-year fall in March.

Production in the service sector remained flat in April from a month earlier, with a 2.6 percent on-year gain.

The annualized growth rate marks the largest since November 2016, when the comparable figure was 1.6 percent.

The statistics office said an upturn in car production and a continued boom in the chipmaking sector contributed to the rebound in the April figures.

Production of vehicles increased 6.7 percent in April from a month earlier, and the chipmaking sector saw its output rise 9.9 percent.

Its average factory operation rate stood at 72.5 percent in April, up 2.2 percentage points from March when the comparable figure was 70.3 percent, the lowest since March 2009.

The statistics office said it is too early to say that Asia’s fourth-largest economy is losing steam. There has been some controversy over whether the economy is starting on a downward path.

The government said a recovery in the global economy, eased geopolitical risks and the implementation of an extra budget will help the economy chug along going forward, although there are some downside risks such as the normalization of monetary easing in major economies and potential rate hikes in the United States.