Sharing is caring in tough times

Sharing is caring in tough times 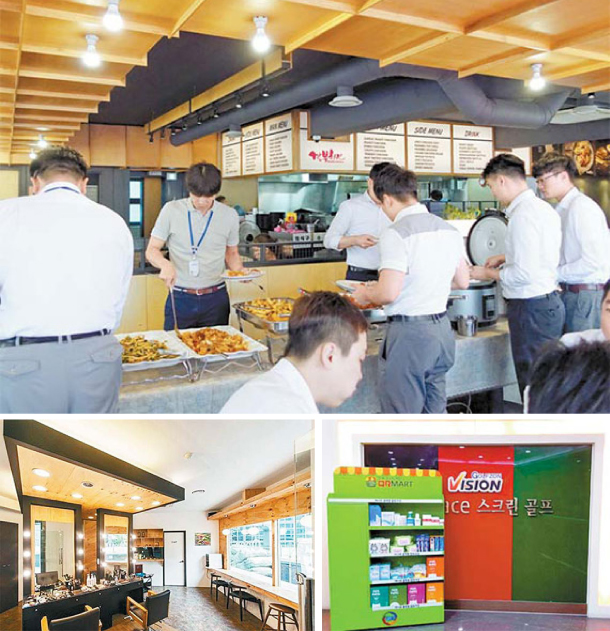 Clockwise from top: A fried chicken shop in Daechi-dong, southern Seoul, operates as a Korean buffet during lunch. A QR Mart at a screen golf center in Pangyo, Gyeonggi. A makeup shop inside a hair salon in Gangnam District, southern Seoul. [FRANSTORE, UP, WITHIN SHOP]

Customers purchase these products, manufactured by small and medium-size enterprises (SMEs), through an online app. The restaurant owner gets to keep 30 percent of the profit from sales without actually having to process any of the transactions himself.

“The goods are like a welcome rain in a drought,” said the owner, “boosting profits by just sitting in a display case.”

As the minimum wage hike and shortened working hours make it increasingly difficult for businesses to maintain profit levels, sharing store space has been rising as a popular way to cut costs for business owners, many of whom are tenants themselves paying monthly rent to landlords.

One popular way of sharing space is renting out a corner of the property to be used by a third party to sell goods.

Customers can buy items on the spot or pre-order and pick them up from the QR Mart of their choice, submitting all orders and payments online.

Shopkeepers have little to lose from hosting QR Marts, a sort of store-within-a-store, or a shop-in-shop. Stores get a small income from allowing the machines on their premises while also increasing the chance of selling their own goods and services as footfall increases.

“SMEs can test out whether their products are competitive as well, killing two birds with one stone,” said Park Jin-seok, CEO of Up, which operates QR Mart. “Starting with Pangyo, we hope to later expand QR Marts to Incheon and Seoul.”

Most other shop-in-shops are manned, with owners paying rent to shopkeepers directly regardless of whether the shopkeeper is actually the landlord.

In Seoul, shop-in-shop owners pay shopkeepers an average of 300,000 won ($280) to 400,000 won per month along with a deposit of 2 to 3 million won. Shop-in-shops usually take up no more than one-fifth of the store space. Most sign one year contracts.

Besides lowering costs, having two businesses of a different nature inside the same space also has the perk of attracting customers from one shop to the other and vice versa. Common combinations are accessory shops in clothing stores and cafes in galleries.

Within Shop, which connects shopkeepers to merchants hoping to open a shop-in-shop, currently lists around 230 stores looking for companions online.

“Because the shopkeeper and the tenant have to work in a single place together for a long time, it’s important for them to be compatible,” said Kwon Hye-jin, the CEO of Within Shop.

Besides hosting shop-in-shops, business owners can also share space by renting their stores to other businesses outside of their opening hours.

A restaurant in Dongdaemun district, central Seoul, sells kimchi stew and fried rice during lunchtime and grilled barbecue for dinner. The 42-year-old owner of the barbecue restaurant, surnamed Huh, rents the store to a 37-year-old surnamed Park during lunch time. Park takes over the store from 9 a.m. to 3 p.m., paying around 1 million won to Huh in monthly rent.

“I thought it was a waste to leave the store space empty during lunchtime,” said Huh, who operates his barbecue business from 5 p.m. to 1 a.m. “But operating longer would be too tiring. Renting out my store relieved a lot of financial burden.”

The arrangement works out for Park as well.

“As long as I pay the rent, I can share the cooking utensils and equipment, which helped me save a lot of money,” said Park.

Connecting entrepreneurs who want to share space has become a business of its own. Franstore, one such service, now helps some 80 businesses that open in the evening, like barbeque restaurants and pubs, make partnerships with eateries that open for lunch.

Part-time store rentals only cost about 30 percent of regular monthly rent. Renting store space for six hours in Gangnam District, southern Seoul; Gwanghwamun, central Seoul and other popular commercial areas, for example, costs around 2 to 3.5 million won a month. Renting property in those areas would be impossible at that price.

Though there are many merits to sharing store space, these arrangements can be risky for both parties.

The secondary shopkeepers, who rent store space for a portion of the day or operate shop-in-shops, are not under direct protection of the Commercial Building Lease Protection Act. Real estate experts recommend that these secondary tenants precisely record the deposit sum, rental fees and hours of store space usage when signing contracts.

“If they have the landlord’s approval,” said Boo Jong-sik, a lawyer from the law firm Nanum, ”subtenants may even receive protection from the Commercial Building Lease Protection Act as well.”

In some cases, shopkeepers hire subtenants as employees. Under this format, however, subtenants cannot receive protection from either laws on subleasing or the Commercial Building Lease Protection Act, and thus may encounter disadvantages, like sudden eviction.

“Because more than 70 percent of self-owned businesses fail, sharing commercial space may become even more popular,” said Kwon Gang-su, a director at the Korea Establishment Realty Agent. “The safe thing to do would be to receive an agreement of sublease from the landlord.”