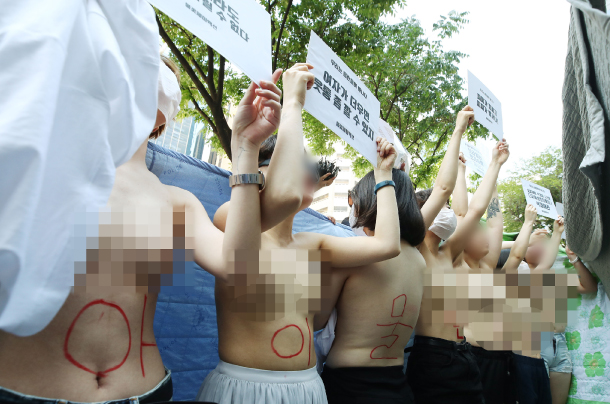 Members of a feminist group called Fire Femi Action protest against Facebook Korea in front of the company’s headquarters in Gangnam District, southern Seoul, on Saturday. Ten members stood topless shouting, “Free the nipple,” while holding signs that read, “We are not sexual objects.” [YONHAP]

A feminist group protested topless outside Facebook Korea’s headquarters in Gangnam District, southern Seoul, on Saturday after the social media site removed photos from the group’s “free the nipple” event.

“Nipples are nipples, nothing more,” one of the signs read. “We are not sexual objects,” read another.

The protest was a response to Facebook Korea’s deletion of photos from a topless event organized by the group, Fire Femi Action, on May 26 in Yeongdeungpo District, western Seoul.

The images were uploaded to the group’s Facebook page three days after the event with permission from the participants, the group said, but were taken down by Facebook Korea “not even five minutes later.” Fire Femi Action’s account was also suspended.

Ten members of the group gathered in front of Facebook Korea’s office at around 1 p.m. on Saturday, shouting, “Free the nipple,” and calling Facebook’s policies discriminatory against women because “men’s exposed nipples aren’t blurred or taken down.”

As the protesters prepared to take their tops off, police immediately held up blankets and hid them from public sight. The women asked police why they were being covered when no one reported them and decided to end their protest after 15 minutes because of police interference.

Fire Femi Action questioned why images of women’s bare chests were considered “pornographic” and “regulated” while men’s chests weren’t, and criticized Facebook Korea for gender discrimination. One sign read, “I willingly uploaded photos of my bare chest, why are you deleting it?”

Later that day, Facebook Korea apologized to the group in a message and said it had restored the deleted images, which were initially taken down “because of a company mistake,” the message read.

Facebook bans images of adult nudity and sexual activity except in cases where nudity is used as a “form of protest” or to “raise awareness of a cause.”

“Where such intent is clear, we make allowances for the content,” reads Facebook’s Community Standards.

“For example, while we restrict some images of female breasts that include the nipple, we allow other images, including those depicting acts of protest, women actively engaged in breast-feeding and photos of post-mastectomy scarring.”

Some passers-by questioned the necessity of the group’s protest.

“They are brave,” one woman said, “but do they really need to come out onto the streets and behave like this?”

“In the past, this display of behavior would have been a problem,” another woman said, “but in today’s rapidly changing world, I think it’s okay.”

Fire Femi Action’s Facebook post from May 29, which questions the sexualization of women’s breasts, has garnered even more attention after the protest. The group itself was the most-searched word on Naver, Korea’s largest portal site, at one point on Sunday. The Facebook post has received over 10,000 comments.