Close but no cigar for Kim Hyo-joo at Open

Close but no cigar for Kim Hyo-joo at Open 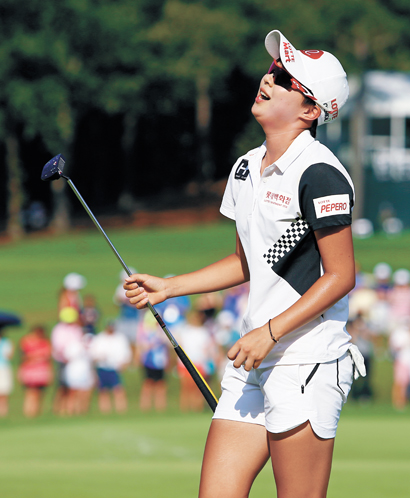 Kim Hyo-joo reacts after missing a putt on the 18th hole during the final round of the U.S. Women’s Open at Shoal Creek, Alabama on Sunday. [AP/YONHAP]

It could have been the biggest come-from-behind victory in U.S. Women’s Open history, but Kim Hyo-joo had to walk away with a runner-up finish after losing in the fourth playoff hole to Ariya Jutanugarn of Thailand at Shoal Creek, Alabama, on Sunday.

Kim started the final round six shots behind Jutanugarn, the leader, but seemed to have her putting on point. She made a birdie on the first hole and two more on the third and sixth holes, but she had her work cut out for her after Jutanugarn finished the front nine with five birdies and a bogey.

The back nine offered Kim an opportunity to close her gap with Jutanugarn. At the par-4 10th hole, Jutanugarn made a triple bogey and added three bogeys and a birdie in the back nine to end the round at one over par. Kim made two birdies to finish her round at five under par.

With the two players tied for the lead, the match was extended into a two-hole aggregate playoff where the player with the lowest cumulative score after two holes wins. The playoff was played on the par-4 14th and par-4 18th holes.

The odds seemed to favor Kim, who started the first playoff hole with a birdie from a 10-meter putt. Jutanugarn’s 5-meter putt missed, and she settled for a par.

Kim’s one-shot lead didn’t last long. The two finished the aggregate playoff with a tie at even par after Kim made a bogey and Jutanugarn made an up-and-down for a par.

With the winner undecided, the playoff went into sudden death. They went back to the 14th hole but both made par, so it was onto the 18th hole. Both Kim and Jutanugarn hit their second shot into the bunker. Kim’s was short of the green; Jutanugarn’s shot went over the green.

Jutanugarn then made a successful sand save, hitting her shot about half a foot from the hole, and once Kim missed her par putt, Jutanugarn was declared this year’s U.S. Women’s Open Champion. It was her second major title of her career.

“I started off quite a few strokes behind the leader, so I didn’t really think that I was going to come through this much,” Kim said after her match according to the LPGA. “I feel very good about how I played, especially that I did not have a bogey today on the final round. When I made that putt [on No. 15] I felt like the luck was with me today.”

Before Kim joined the LPGA, she was already well known on the tour. In 2014, she won the Evian Championship in her first major appearance and earned a tour card without having to go through qualifying school.

In her rookie season, Kim won the 2015 JTBC Founders Cup, her first title as a full LPGA member. She then started her second season with a victory at the 2016 Pure Silk-Bahamas LPGA Classic, but since then, she hasn’t won a tournament.

This season, Kim’s struggle has continued. She missed the cut in three out of eight LPGA Tour events she competed in prior to the U.S. Women’s Open.

Although she didn’t win the Open, a runner-up finish will be a confidence booster for the rest of the season. And she got to take home prize money worth $540,000.

“Although the playoff did not go as I wanted, I’m just happy and take pride that I made it to the playoff,” Kim told Yonhap. “I hope I can keep this up for the rest of the season. I am disappointed that I followed a birdie with a bogey in the playoff, but overall, I am satisfied that I even got to the playoff.”

Park In-bee, the top-ranked female golfer in the world, finished ninth at one under par, while Kim Ji-hyun, who plays on the KLPGA Tour, finished tied for 10th at even par. Park Sung-hyun, the defending champion, missed the cut.