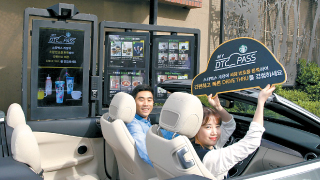 Models in a convertible pose with a sign for the drive-through automatic payment system DT Pass, which is available at 11 branches in Seoul starting today. [STARBUCKS KOREA]

Starbucks Korea launches a service today that allows drive-through customers to pay for their beverages without reaching for their wallets.

The service starts at 11 branches in Seoul and the company plans to expand it to 140 branches nationwide by August.

A device installed at the entrance of the drive-through will automatically read the license plate of a car, identify the customer and deduct the proper amount of money from his or her rechargeable membership card.

They have to register their license plate number with their membership.

If they put in an order through Siren Order, a remote ordering app, their order will be processed as soon as they arrive.

“A simulation showed that the time spent by a Starbucks barista to see the order information and to make a payment was reduced by 13 to 15 seconds per consumer, which accounts for 10 percent of the entire time spent at the drive-through [from the entrance to exit],” the company said in a statement.

Starbucks Korea is the first to launch the service.

The company said it spotted the need for a simpler and shorter payment service through big data analysis and a survey conducted of Starbucks account members.

The electronic device that reads the license plate was developed by a team at Starbucks Korea, which was also responsible for developing the Siren Order service.

Korea is also the first country in which Starbucks adopted the Siren Order service, which was highly praised by the coffee chain’s founder Howard Schultz in May 2014.

Portland was the second place the service was introduced in December 2014 and later expanded to other markets including the United Kingdom, Canada and Hong Kong.