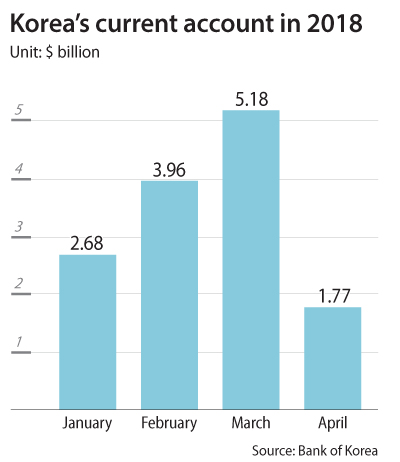 Korea posted a current account surplus of $1.77 billion for April, according to preliminary data released by the Bank of Korea on Tuesday.

The country’s current account has been in the black for 74 consecutive months since March 2012. The figure for April, though, was the lowest number since April 2012, when the account had a $90 million surplus.

“The goods account surplus narrowed to $10.36 billion,” said the central bank in a press release on Tuesday.

“The reason why the surplus hit the lowest level in six years was because of the reduction in the goods account surplus and expansion in dividend payments for the month,” said Noh Choong-sik, the head of the financial statistics team at the Bank of Korea.

The central bank’s data showed that the primary income account, which includes wage payments as well as earnings from investments and dividends, posted a record deficit of $5.86 billion in April. In particular, Korean companies paid their investors $7.57 billion in dividends, an all-time high, thanks to companies’ improved earnings and increased stock purchases from foreign investors.

“April each year is when companies that balanced their accounts in December [in the previous year] pay dividends to their investors,” Noh said. “We will see a pattern where the current account surplus shrinks due to growing dividend payments each April, but we believe the [current account] surplus will increase in May and June.”

The data shows that Korea posted $51.5 billion in exports in April, up 7 percent from a year ago. The growth in imports was steeper than exports, as imports grew by 12.5 percent year on year to $41.1 billion, affected by factors such as the rise in gas prices.

According to the central bank, the services account deficit for April stood at $1.98 billion, an improvement from the $2.42 billion deficit one year earlier thanks to the recovery of Korea’s travel account. The loss in the travel account in April was $1.09 billion, which narrowed from $1.24 billion last year. April’s travel deficit was the lowest in 16 months due to the return of Chinese tourists after relations between Seoul and Beijing showed signs of improving recently.