Samsung Electronics is accelerating moves to embrace open innovation and beef up its artificial intelligence R&D, key initiatives for its future growth.

The tech giant announced on Tuesday that it has given David Eun, president of Samsung NEXT, the newly-created role of chief innovation officer. Eun will keep both roles. As well as the chief executive officer, there have only ever been two other chief officers in Samsung Electronics - chief strategy officer and chief finance officer.

“We have made a new position that is not common in the industry to step up open innovation in preparation for the fourth industrial revolution,” said a Samsung Electronics spokesman.

The decision comes as Samsung moves to find new growth engines. Silicon Valley-based Samsung NEXT, often described as a start-up within Samsung, has been devoted to finding new software and services firms that could complement Samsung’s hardware in the long term. Eun has been responsible for early stage investments, product development, partnerships and acquisitions at the company. 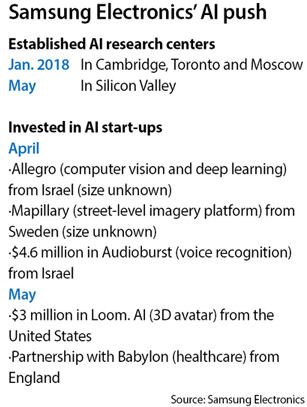 As CIO, Eun will focus on “trying to develop a vision for what Samsung Electronics could be five years from now and beyond,” he said in an interview posted on the Samsung NEXT homepage. His appointment “affirms how important innovation is generally for Samsung,” he added.

Eun offered a sneak peek into the future smartphones Samsung is trying to create. They will be capable of identifying users and their preferences and knitting together experiences by pulling together different parts of different apps and services and customizing the content for them, he said.

Samsung has more than 300,000 employees worldwide and invests more than $12 billion a year in research and development. Since December 2012, when he assumed the president position at Samsung NEXT, Samsung has been No. 2 in the United States in terms of filing and receiving patents, according to Eun.

A graduate of Harvard College and Harvard Law School, Eun served as president of AOL Media and Studios and global head of content partnerships at Google. He also worked at Time Warner and NBC Entertainment.

Eun’s appointment comes as Samsung, under the leadership of Vice Chairman Lee Jae-yong, has launched a range of AI-related projects including establishing three AI research centers around the world, investing in some 10 AI start-ups and acquiring AI-related talent.

They are Sebastian Seung, professor at the Neuroscience Institute and department of computer science at Princeton University, and Daniel Lee, the UPS Foundation Chair Professor in the School of Engineering and Applied Science at the University of Pennsylvania.

They will play a primary role in bolstering research on AI that will advance human knowledge with the potential for revolutionary business impact, Samsung said.

A computational neuroscientist, Seung studied theoretical physics at Harvard University. He worked as a researcher at Bell Labs and a professor at the Massachusetts Institute of Technology before joining Princeton University in 2014.

Lee earned his bachelor’s degree in physics from Harvard University and a Ph.D. from MIT. After working as a researcher at Bell Labs, he joined the School of Engineering and Applied Science at the University of Pennsylvania in 2001.

In a related vein, Samsung in May vowed to hire more than 1,000 AI researchers and engineers by 2020. Six hundred will be picked domestically while the remaining 400 will be recruited from abroad.

“We believe we can achieve progress in the AI sector after having obtained more than 1,000 AI human resources,” said Kim Hyun-seok, president of Samsung’s home appliance division, at a press conference in May. “Acquisition of quality resources is crucial since there aren’t that many AI experts out there.”