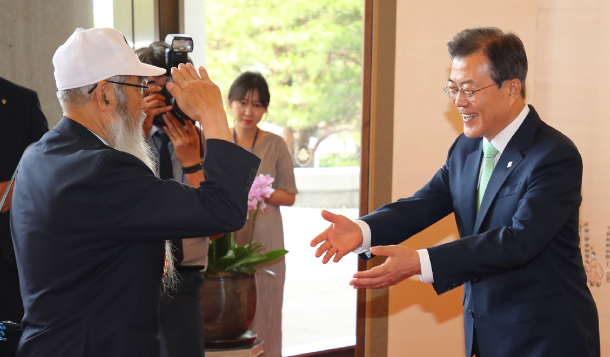 President Moon Jae-in, right, greets a Korean War veteran at the Blue House on Tuesday before hosting a special luncheon for soldiers, veterans and their families. [YONHAP]

President Moon Jae-in vowed to continue increasing government support for soldiers and veterans on Tuesday, saying it was not only right to reward those who sacrifice their lives for the country but also a way to make the nation stronger.

“It is my firm belief as president that a nation deserves to be called a true one when national heroes and their families are proud of their deeds,” Moon said during a meeting with about 200 soldiers, veterans and their families at the Blue House. The event was held a day before the country’s Memorial Day.

Moon said his government has been expanding its support for veterans and their families since he took office in May last year. Such efforts have included raising the monthly compensation for veterans to a record level and expanding insurance coverage of their medical expenses from 60 to 90 percent.

“The government will continue to raise the value of patriotism,” Moon said. “It will not blame insufficient funds or the lack of necessary regulations for its failure. The nation will pay its due respect to all who deserve such treatment by finding every last hero.”