Science Ministry to reveal cost of 4G to telecoms

Science Ministry to reveal cost of 4G to telecoms 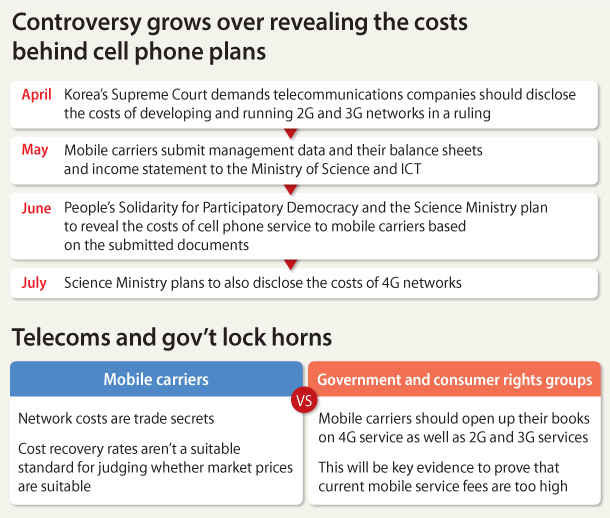 The Ministry of Science and ICT plans to unveil the expenses behind Korean telecommunication companies’ 4G LTE networks as early as the end of this month.

Sources from the telecommunications industry said on Tuesday that four people last month submitted information disclosure requests to the Science Ministry over the costs incurred in developing and running LTE networks.

The costs in question are those spent on developing and establishing the network, as well as marketing and operational costs. The request demanded that the ministry release all its financial and operational data related to LTE services offered by local mobile carriers.

The request came after the Supreme Court ruled in April that mobile carriers should disclose the costs behind their 2G and 3G network services offered between 2005 and 2011, seven years after the activist group People’s Solidarity for Participatory Democracy filed a suit against government authorities in order to make mobile carriers be more transparent with their pricing system.

The ministry will likely go ahead and force mobile carriers to reveal more data, as the Moon Jae-in administration has pledged to push down household phone bills. There’s also intense public interest in the actual price of wireless data.

Last month, the three carriers told the Science Ministry that it was not their duty to disclose data from after 2011, but the ministry rejected their appeal.

The telecom companies claim that strong pressure to lower household phone bills could only lead to deteriorating business profitability and reduced investment in the next-generation 5G network, which the companies are trying to commercialize by early next year.

The carriers also say the move will interfere with the market, as a public institution will be releasing the pricing scheme of a private company.

“If you look closely at the court’s ruling, it decided to make carriers open up their cost data, considering that a long time has passed since they offered [2G and 3G services],” a high-ranking spokesperson from a mobile carrier said under the condition of anonymity. “It is a severe violation of companies’ business rights to make them disclose the costs of services offered right now, not in the past.”

The mobile carriers’ greatest concern is government and civic groups using the companies’ cost-to-revenue ratio as a means to further push them into lowering household phone bills. The civic activist group has been demanding the carriers cut phone bills if revenue divided by costs - or the cost recovery rate - exceeds a break-even point of 100 percent.

The mobile carriers, however, say that the cost-to-revenue ratio is a concept only used to assess whether the rates of natural monopolies like electricity, water and gas are appropriate, and should not be used to evaluate telecom fees, which are based on market competition.

“Releasing cost information on 4G LTE, which is currently the dominant service, is like exposing the confidential business information of local carriers,” said Cho Dong-keun, an economics professor at Myongji University. “It is an unprecedented request.”

Cho added that the government is being swayed by consumer groups.

People’s Solidarity for Participatory Democracy will hold a press briefing this week to disclose the cost data on 2G and 3G services that they won the authority to expose through the earlier court ruling.