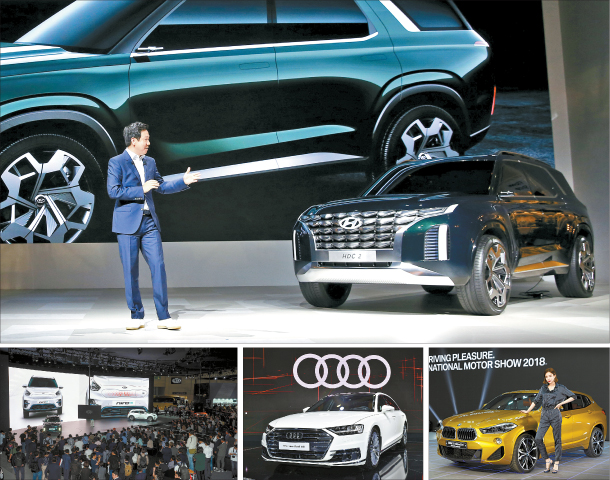 BUSAN - This year’s Busan International Motor Show is awash in new concept cars vying to predict the future of the automotive industry.

Some of the concepts are showing off carmakers’ vision and imagination, and won’t ever be hitting the market. Some of them, though, are previews of new vehicles that will feature state-of-the-art technology and slick designs.

Hyundai Motor premiered the HDC-2 Grandmaster, a large SUV concept, in Busan. Its design will be reflected in Hyundai’s new large SUV, currently known by its project name LX2, which is set to launch later this year in Korea.

The Grandmaster is the second model that reflects Hyundai Motor’s new design vision, which it’s dubbing “sensuous sportiness.” The first model to implement the idea was the Le Fil Rouge concept, which the company first displayed at this year’s Geneva Motor Show.

Korea’s biggest automaker took the motor show as an opportunity to elaborate on the company’s future design identity.

Hyundai announced Thursday that it will provide unique models depending on the consumer groups each vehicle targets, instead of producing cookie-cutter cars with a shared familial design.

“It is hard to find a general solution [in terms of design] that suits all lifestyles,” said Lee Sang-yup, the head of Hyundai Styling, in Busan.

“Hyundai will not follow the manufacturer-focused design, but will instead have customer-focused designs,” Lee added. “It will be called Hyundai Look, and like chess pieces that each look distinct, converge to display one theme when together, Hyundai Motor models’ designs will vary across the brand.”

The Grandmaster concept featured a twisted version of Hyundai’s signature Cascading grille, which also made an appearance on the Le Fil Rouge. Otherwise, though, the two vehicles looked quite distinct.

The automaker also showed off the facelifted version of its midsize SUV Tucson for the first time in Asia. The new Tucson is slated to launch here in the third quarter of this year.

Kia Motors unveiled its SP, a small SUV concept, for the first time in Korea. The model will launch in India in the latter half of next year, and will also be produced domestically for the Korean market. The SP’s design features Kia’s signature tiger grille, and has a sporty demeanor, with its long hood and curves. The high-tech interior has been equipped with a wide LCD monitor.

The all-electric Niro small SUV, which can run 380 kilometers on a single charge, took center stage at Kia Motors’ booth. The electric Niro’s grill matches the color of the car’s body, and also is equipped with futuristic arrow-shaped daylight running lights.

The Niro EV’s interior which was unveiled for the first time in Busan, has been revamped to look more high-tech, and includes a 7-inch digital cluster.

It displayed its Essentia concept, an electric sports car, for the first time in Asia.

Audi made it back to this year’s Busan International Motor Show for the first time in two years after its diesel emission scandal. Volkswagen, which was also implicated in the scandal, wasn’t at the show.

Audi started selling its A6 sedan again earlier this year, and said that it will launch the A4 before the end of 2018. Next year, it will relaunch its SUV lineup with the Q2 and Q5 models. The automaker pledged to sell 15,000 cars in Korea in 2019.

Audi also showed off its A8 sedan, equipped with Level-3 autonomous driving technology, in Busan. The company’s first introduced its new flagship sedan at last year’s Audi Summit in Barcelona. It is set to launch next year in Korea.

Along with the A8, Audi displayed three concept cars that demonstrated its vision for future mobility. The Audi Q8 Sport concept is a sporty-looking SUV, the Audi H-Tron Quattro concept is a fuel-cell-powered car and the Audi Elaine is an artificial intelligence-equipped self-driving car.

BMW Korea focused on introducing cars that will soon hit Korean roads. It unveiled six new models including the plug-in hybrid i8 roadster and the new X2 and X4 SUVs.

It also showcased a Z4 concept, which previewed BMW’s vision for its roadster model. The Z4 concept has a longer wheelbase and fluid curves. The driver’s seat has also been shifted towards the middle of the car.

The midsize Equinox SUV took center stage at GM Korea’s booth, and Renault Samsung Motors focused on its small Clio hatchback, which it released in Korea this year.

SsangYong Motor did not participate at this year’s motor show.

The Busan International Motor Show, which takes place biennially in the southern seaport of Busan, is the biggest motor show in the country. It kicks off its 10-day run on Friday.

A total of 200 new cars from 19 brands will be on display at the show.