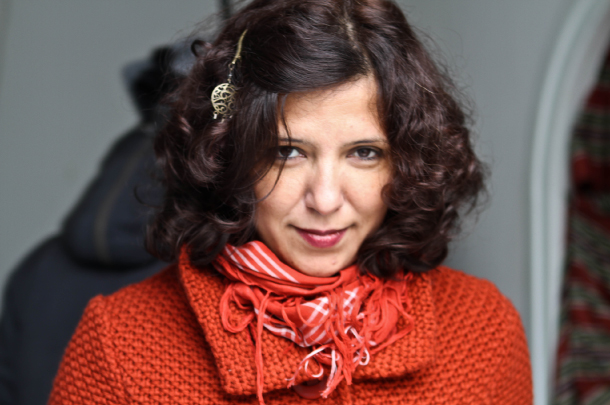 A man on a motorbike with a razor blade in hand prowls the streets of Tunis, slashing the buttocks of women dressed in tight jeans or exposing what he deems to be too much skin. His name is Challat, and he was the inspiration behind director Kaouther Ben Hania’s movie “Challat of Tunis.” In Ben Hania’s other film, “Beauty and the Dogs,” a 21-year-old student who has been raped by police officers is forced to request a special certificate for a medical examination from the very police station where her attackers work.

The two films, which were screened at the seventh Arab Film Festival that ran through this Wednesday, both deal with hideous crimes committed against women. They were both inspired by incidents that caused an uproar in Tunisia in the 2000s. Men who were still holding on to traditional values were not open to the liberation of women that was spreading across the region, which led some to commit hate crimes.

Ben Hania, 41, has captured women’s stoies through her films made after the Jasmine Revolution that forced Zine al-Abidine Ben Ali, the former President of Tunisia, to step down in January 2011. The director’s films received international attention and were invited to prestigious film events like the Cannes Film Festival. She talked to JoongAng Ilbo, an affiliate of the Korea JoongAng Daily, ahead of the festival to discuss her work. The following are edited excerpts from the interview.

Q. The fact that a man slashed women’s buttocks on the streets is very shocking. How did you come by the story for “Challat of Tunis?”

A. The film is based more on a rumor than on a true story. The rumor became a fantasy or an urban legend as it traveled faster and further than the truth. As fears over Challat grew, it quickly snowballed into a juggernaut. In fact, the true story of Challat was not as terrible as the rumors; however, it was still worth noting that the rumor sparked panic under the Tunisian dictatorship because no one properly investigated the case. I made this film because I wanted to dig deeper in to this rumor and spot the hidden truth in the sea of lies.

In “Challat,” Why did you decide to shed light on not only the victims but also the assailants?

We may find it more difficult to understand assailants than victims. We would never know what they are thinking unless we get inside their heads. I decided to focus on the assailants because I wanted to know why they did what they did. I made references to great mockumentaries such as Woody Allen’s “Zelig” (1983) and Peter Watkins’ “Punishment Park” (1971). I truly hope that audiences can understand my decision to make a mockumentary about the assailants.

Hate crimes against women have recently gotten more attention in South Korea as it has in other countries. What do you think are the causes of misogyny?

To be honest, I do not know much about hate crimes against women in South Korea. However, hate crimes against women are common across the world. Now, women have the right to speak up, work hard and control themselves unlike in the past when they were treated like animals. They are fighting the old way of thinking, which caused a war between men and women. I believe the #MeToo movement is one of the changes brought to the world in line with that. If women speak up just as they do during the #MeToo movement, they will be able to transform the society little by little.

“Beauty and the Dogs” addresses the problems of bureaucracy in Tunisia. How did the Jasmine Revolution transform Tunisian society? Do you think there are still problems that need to be solved?

Since the Jasmine Revolution in 2011, Tunisia has been facing some big changes different from the ones you see under dictatorship. As you can see from cases in Latin America or Romania, while a young democracy may be thriving, challenges still remain as the former authorities want to return to power. A good example of this would be the scene from “Beauty and the Dogs” when the police try to make a compromise with Mariam (who was raped by several police officers). This film shows that the police still hold onto the old way of thinking. After all, the protagonist is afraid of the public authorities and that fear still remains. Nevertheless, it is worth noting that before the Jasmine Revolution in 2011, I would have never been able to make this film. Thanks to the revolution, we have freedom of speech, which eventually led to the production of this film. You could even say Tunisian society has gone through dramatic transformations, considering the fact that this film was funded by the Tunisian government.

Despite the fact that she is a woman, the female police officer has responsibilities to fulfill in her own position. I created this character to show that while she may seem strong on the outside, particularly considering her occupation, [she is probably] weak inside. You may find it hard to believe that a pregnant woman can call another woman a “whore.” But women can be mean to each other. When Mariam gets sexually assaulted in the beginning of the film, the audience worries about her and hopes she finds a solution. When a female police officer appears, they feel relieved. However, that is when something absurd happens.

You have been addressing women’s issues in your films. Do you think you will continue to do so?

Because I am a woman, I am familiar with and buy into women’s stories. However, my next film, “The Man Who Sold His Skin” will be centered on a male protagonist who is a refugee from Syria. This film will follow how an American contemporary artist travels around the world and works on an art project with a Syrian refugee from Beirut.