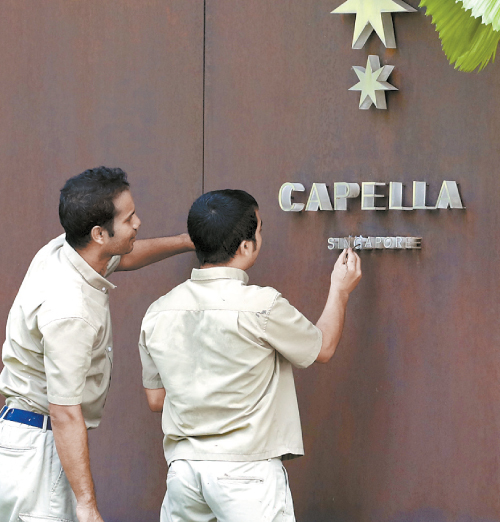 Workers on Thursday clean a sign at the entrance to the Capella Hotel, the venue for the Trump-Kim summit. [YONHAP]

U.S. President Donald Trump is reportedly toying with the idea of offering North Korean leader Kim Jong-un a second summit at his Mar-a-Lago resort in Palm Beach, Florida, possibly in the fall if the first bilateral summit goes smoothly next week.

Citing several U.S. government officials who spoke on the condition of anonymity, Bloomberg reported Wednesday that the White House wants Kim to commit to a timetable to surrender his country’s nuclear arsenal when they meet next Tuesday in Singapore, and that Trump has been advised not to offer Kim any concessions.

If the two men “hit it off,” the White House chief could suggest a second face-to-face meeting at his resort in the southern state of Florida, said the report, without further explanation. No North Korean leader has ever set foot in the United States. Kim has made only three known foreign trips so far since assuming power in December 2011, twice to China and once to South Korea.

“There could be more than one meeting, more than one conversation” between Kim and Trump, said Kellyanne Conway, Trump’s counselor. A nuclear deal, she continued, may take “two, three, four, five” meetings.

A second possible summit at Mar-a-Lago was the latest hint that Trump was serious about meeting Kim more than once this year after he floated the idea last week at the White House following a meeting with a North Korean envoy.

“We’re going to start a process,” Trump continued. “And I told them today, ‘Take your time. We can go fast. We can go slowly.’”

If the Trump White House does decide to hold several more meetings with North Korea this year after the summit next week, it could signify that the administration has finally gone through a reality check - that the regime won’t give acknowledgement of complete, verifiable and irreversible denuclearization (CVID) so easily.

The gap in positions appeared to be evident in recent working-level meetings in the demilitarized zone, where U.S. Ambassador to the Philippines Sung Kim led a delegation for negotiations with North Korean officials on a summit agenda. Local diplomatic sources with knowledge of the meetings said the Trump team pressed Pyongyang to officially commit to CVID next week in Singapore and promise to carry out an early form of denuclearization in the near future. The North Korean delegation, led by Vice Foreign Minister Choe Son-hui, rejected this, urging their denuclearization process to be carried out in several phases, with the United States offering rewards for each step.

The Bloomberg article did not explain why Trump specifically chose autumn for a second summit, but the timing could politically benefit both leaders.

U.S. midterm elections fall in November, and Pyongyang will celebrate the 70th anniversary of its foundation on Sept. 9. In a New Year’s address on Jan. 1, Kim vowed to celebrate the anniversary with “splendor.”