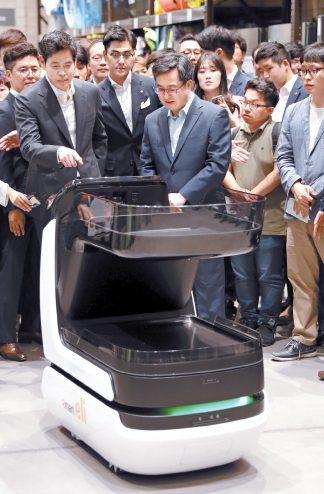 Shinsegae Group will continue to recruit more than 10,000 new employees every year, the company vowed during a meeting with the country’s top economic policymaker on Friday.

Kim Dong-yeon, minister for strategy and finance and deputy prime minister for the economy, met Friday with Chung Yong-jin, vice chairman of Shinsegae, and other executives of the retail giant at Starfield Hanam, a mega shopping mall run by the group in Hanam, Gyeonggi.

“Starfield Hanam is the fruit of our ambition to provide new and innovative experiences to our customers,” Chung told Kim. “It is also where 300 contractors [of Shinsegae] and 4,700 employees work together, and Shinsegae Group will continue to work to establish a business model and system in which everyone can co-exist.”

During the meeting, Chung and the group said that in addition to hiring over 10,000 new workers per year, the second-largest retail giant in Korea will increase its annual investment to 3 trillion won ($2.79 billion) for the next three years. That is 400 billion more than the amount Shinsegae has invested in each of the past five years.

The meeting was the fourth of its kind in which Kim sat down with a top manager of a local conglomerate.

“The company hired about 10,000 to 15,000 employees in the past two years,” explained a spokesperson for Shinsegae. “Our goal is to maintain that level for the coming years despite a downtrend in the off-line retail market.

“For the investment commitment, we will use it to expand our online platform and develop the sites for our new department stores,” the spokesperson added.

Along with investment, the group will help the government increase the number and quality of jobs in the country, Chung promised.

Shinsegae was the first conglomerate in Korea to adopt a 35-hour workweek, which went into effect at the beginning of this year. Chung and the executives told Kim at the meeting that the group will continue to innovate in order to increase the number of quality jobs in the country.

“The service industry has a bigger job-creating effect than other industries,” said Kim, calling Shinsegae an exemplary case of adopting advanced employment culture.

The vice chairman of the group also emphasized the importance of economic progress through innovation.

“As a retail company, we have been in a sense of crisis recently due to the rapidly changing [spending patterns] of our customers,” said Chung. “I believe we are in desperate need of innovative growth, not only for the sake of our group but also for the sake of our country’s economy.”

So-called “innovative growth” is a key initiative of the Moon Jae-in administration. The initiative promotes advances through technology.

Shinsegae has been a pioneer in the country in adopting the technology in the retail sector.