How to denuclearize North Korea

How to denuclearize North Korea

Nearly three decades of dealing with North Korea over its nuclear weapons program has taught the world many lessons — most of them cautionary — but gives no simple path to successful denuclearization.

Officials from North Korea and the U.S. have spent the past few weeks trying to nail down an agenda for the June 12 summit meeting between North Korean leader Kim Jong-un and U.S. President Donald Trump.

Studying four previous nuclear deals — two with North Korea and also agreements with Libya and Iran — and taking hints from comments made recently by officials, we can make some predictions on what each side is willing to accept — and adamantly not.

North Korea has made it abundantly clear that it will not accept any denuclearization framework that resembles the Libya model struck in 2003, in which Libyan dictator Muammar Gaddafi agreed to eliminate his weapons of mass destruction for relief from crippling sanctions and normalization of relations with the United States.

“It is a lesson for North Korea to observe,” noted Mohamed ElBaradei, former head of the International Atomic Energy Agency (IAEA), in December 2003 after his inspection of Libya’s nuclear facility.

Two months later, more than 1,000 centrifuge and missile parts were also shipped out of the country. 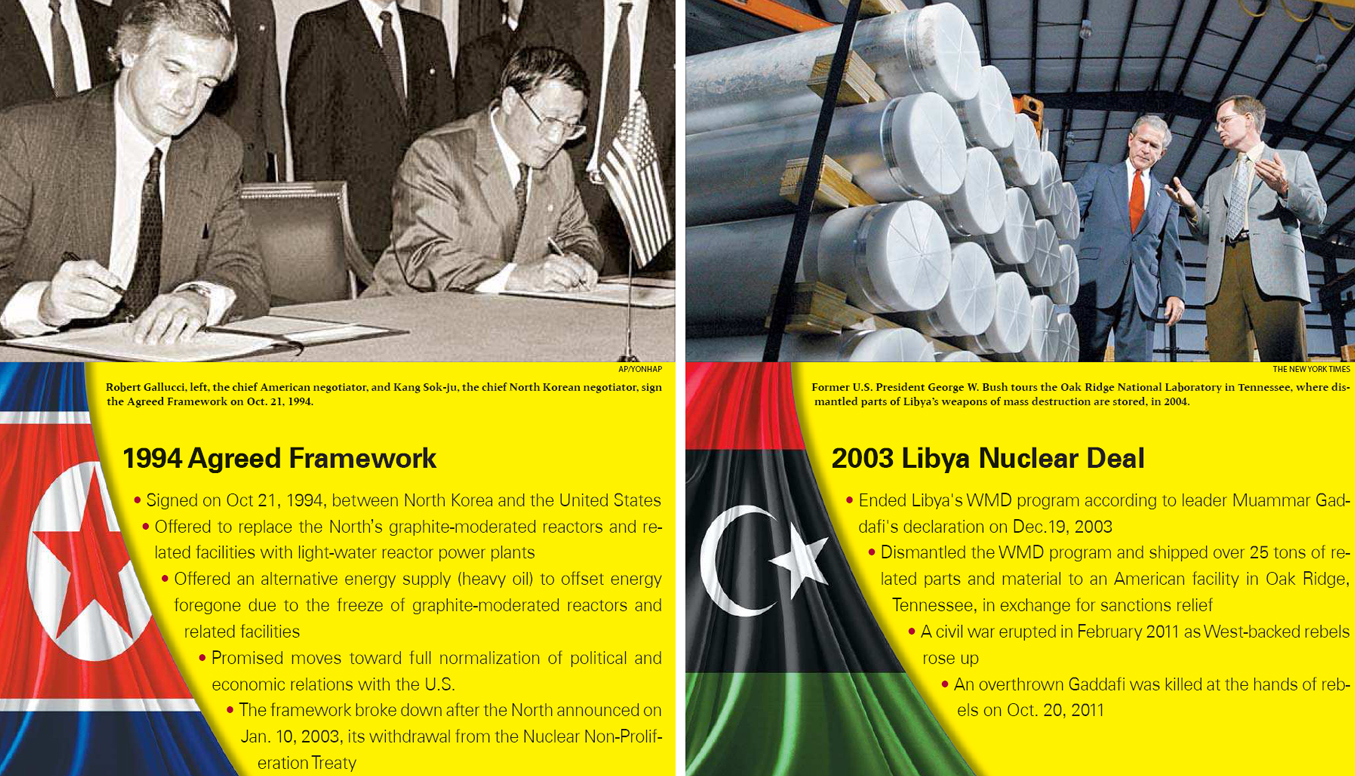 The Libya model is synonymous with a denuclearization framework in which a state gives up its weapons of mass destruction upfront as a precondition for sanctions relief.

While many experts lauded the Libya model and urged the North to learn from Gaddafi, Pyongyang learned a lesson indeed: to never go near such a denuclearization path. Gaddafi was overthrown by anti-government, West-backed rebels and shot to death on Oct. 20, 2011, less than 10 years after he signed the denuclearization deal.

Gaddafi cultivated a close relationship with the late North Korean leader Kim Jong-il, the father of Kim Jong-un. His demise was the ultimate proof that the Kim dynasty must never discard its nuclear weapons unless it has some kind of guarantee for its regime’s security. What kind of guarantee would be sufficient is not known.

The advanced state of the North’s nuclear program also makes it harder to apply the Libya model. While Libya was in the very initial stages of nuclear weapons development in 2003 — years away from producing a nuclear weapon — estimates put the number of nuclear warheads produced by North Korea at up to 60.

The North’s aversion to the Libya model has been evidenced many times, most notably by its calling U.S. Vice President Mike Pence a “political dummy” for his comment last month that the Kim regime “could end up like Libya” if the nuclear deal failed.

Determined not to repeat Gaddafi’s mistakes, North Korea is calling for an action-for-action framework in which it is rewarded with each denuclearization move it makes along the way with measures from Washington that relieve sanctions and somehow guarantee the regime’s security, for instance by normalizing ties with Pyongyang.

In what could be an acknowledgment that the Libya model — requiring the North to dismantle and ship off nuclear and missile parts upfront — is unrealistic for the North, Trump said on May 22, “All-in-one would be nice,” then adding, “Does it have to be? I don’t think I want to totally commit myself.”

Compounding speculation that Trump may adopt gradual denuclearization in return for corresponding sanctions relief and economic aid, the U.S. approach to the North Korean nuclear issue had been “broken down into phases” that would have “corresponding gestures of aid and sanctions relief,” according to an ABC report on May 30, citing a former U.S. official.

The U.S. reportedly would demand the North disclose all information about its nuclear program, dismantle fissile materials and shut down nuclear-related sites in the first phase of action. The second phase would be international inspections and gradual eliminations of the nuclear arsenal, the broadcaster reported.

The problem with a phased approach is that the world has tried that twice with Pyongyang — and been deceived twice. That leaves a deep level of distrust of Pyongyang. And Kim Jong-un is going to have to trust the United States if it offers some kind of regime security, which won’t be easy either.

“The conundrum can be described by economic theory as an example of incomplete contracts,” wrote Seoul National University economics Prof. Kim Byung-yeon, author of the book “Unveiling the North Korean Economy: Collapse and Transition,” in a Korea JoongAng Daily column on May 31. “Parties cannot easily design a deal that is perfectly beneficial to both sides, even in future contingencies.

“Actors that distrust one another — and that is certainly true in the case of Washington and Pyongyang — would naturally question whether each party will stay faithful to their part of the deal,” Kim wrote. He warns of Pyongyang walking away from an accord in the future, even after Kim and Trump shake hands tomorrow in Singapore.

“If economic rewards and easing of sanctions are slow, North Korea won’t be able to stay committed,” Kim wrote. “Also, there is a big possibility that Pyongyang could walk out of the deal with rewards it collected from incremental dismantlement. Such structural obstacles stand between a significant deal over North Korean nuclear arms.”

Washington claims it will not accept any deal short of complete, verifiable, irreversible denuclearization (CVID). The reason Trump withdrew last month from the 2015 Iran Nuclear Deal struck among Iran and five permanent members of the United Nations Security Council plus Germany and the European Union was that it did not live up to this CVID standard.

Under the Iran deal, which led to the withdrawal of nuclear-related economic sanctions on the Middle Eastern nation, Iran agreed to not enrich uranium over 3.67 percent for the duration of at least 15 years and to reduce its stockpile of 10,000 kilograms of low-enriched uranium to 300 kilograms for the next 15 years. If Iran was caught enriching uranium over the 3.67 percent limit, sanctions mechanisms would kick in. Iran has been subject to such restraints while being under the IAEA’s monitoring.

Given that Trump withdrew the U.S. from the multiparty pact after months of criticism that it was “weak,” it seems logical that Washington will accept nothing short of the CVID framework in North Korea.

“What worries the U.S. and international community the most is the North’s nuclear warheads,” Moon Chung-in, a special adviser for President Moon Jae-in on foreign affairs, told the Kyunghyang Shinmun on May 9. “There must be a guarantee from the North that the termination of such warheads could be verified

“In principle, the North cannot escape the CVID framework,” Moon continued. “And since it has agreed to it, it needs to make a clear promise that it will act accordingly for its nuclear facility, material, warheads and ballistic missiles.”

Cheong Seong-chang, a senior researcher at the Sejong Institute in Seoul specializing in North Korea affairs, told the Korea JoongAng Daily that Pyongyang and Washington could lock horns over the details of denuclearization mechanisms, especially on a final destination for dismantled nuclear and missile parts shipment overseas.

John Bolton, Trump’s national security adviser, has stressed numerous times that he wants dismantled parts of WMD shipped to the Tennessee facility as in the Libyan model. It remains to be seen whether Bolton’s comment will be the stance of Trump at the negotiating table with Kim.

“Since it will expose every bit of their nuclear and missile technology to the U.S. if they are stored in the Oak Ridge Nuclear Facility, Pyongyang will likely demand such parts be transported to China or Russia, the North’s longtime allies,” Cheong said.

Kim could promise that the transfer of nuclear materials to China or Russia would be completed in a shorter period of time — around one year — than if they went to the United States, Cheong said.

“If the U.S. insists on the shipment to Oak Ridge, the North could demand stronger guarantees for the regime’s security or more robust business investments in the country. But whatever the outcome may be, the two are going for a fierce debate on this issue,” Cheong predicted.

Things can get more complicated if Trump demands the relocation of North Korean scientists and researchers involved in the nuclear program, who could number in the thousands, out of the country as a measure of irreversibility of dismantlement.

“Pyongyang and Washington are working hard to produce an agreement that reflects demands from both leaders: That the former must execute the CVID of WMD while the latter must guarantee the former’s security with withdrawal of sanctions,” said Lim Eul-chul, a professor at Kyungnam University and the director of the Center for International Cooperation for North Korean Development.

“Declaring an end to the Korean War and the U.S.’s promise for the North Korean regime’s security can be announced right away at the June 12 summit as it is a political statement. On the other hand, relieving economic sanctions and scaling down joint U.S.-Korea military exercises will be carried out in incremental phases corresponding with the North’s denuclearization measures. The two sides have been working to narrow the gap on that point.”

If a denuclearization deal is actually struck, North Korea would expect to see a swift lifting of economic sanctions. The Trump White House even promised to bring economic prosperity to the reclusive nation that could put it “on a par” with South Korea in terms of economic well-being.

“His country will be hardworking and very prosperous,” said Trump at a summit meeting with South Korean President Moon Jae-in on May 22 at the White House, referring to North Korean leader Kim. He said “very large sums” of investment capital will go into North Korea, and, borrowing his own campaign slogan, vowed to “make North Korea great.”

The first inter-Korean business project the Moon government will seek following the lifting of sanctions will likely be the reopening of the Kaesong Industrial Complex, which the conservative Park Geun-hye government shut down in February 2016 in response to the North’s fourth nuclear test a month before. Another inter-Korean project likely to be resumed is the Mount Kumgang tour program, suspended since 2008, when a South Korean tourist was fatally shot by a North Korean soldier.

Another big project, Cheong of the Sejong Institute said, will be reconnecting railroads and highways between the South and North. The reconnected railways and roads can be extended into China and Eurasia, which would one day allow South Koreans to hop on a train at Seoul Station and hop off in Paris or Berlin, a cross-continent journey that will end South Korea’s geographic isolation due to the division of the peninsula.

“By connecting through railroad and highways, South Korea could seize on new economic opportunities brought about by a new wave of people and goods coming from China, Russia and beyond with its access to the lands beyond North Korea,” said Cheong.
A vision of connecting South Korea to Eurasia is already stipulated in the Panmunjom Declaration, the product of the April 27 inter-Korean summit.

“The two sides agreed to adopt practical steps toward the connection and modernization of the railways and roads on the eastern transportation corridor as well as between Seoul and Sinuiju for their utilization,” says the declaration. But without the lifting of international sanctions barring foreign investments in the North, such projects cannot be put into action.

Scaling down joint Seoul-Washington military exercises will inevitably follow as part of a nuclear deal with the North, many experts say.
Professor Lim said the North would demand the U.S. not deploy “strategic assets” such as B-52 bombers during such joint drills.