Choi gets optioned, then immediately traded to Tampa

Choi gets optioned, then immediately traded to Tampa

The Milwaukee Brewers have traded their Korean hitter Choi Ji-man to the Tampa Bay Rays for infielder Brad Miller and cash considerations. 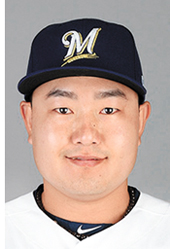 The clubs announced their deal Sunday (local time), hours after Choi was optioned to the Triple-A Colorado Springs.

The deal came a day after Choi hit his first career grand slam against the Philadelphia Phillies.

The Rays will be Choi’s sixth major league organization. He signed with the Seattle Mariners as an amateur free agent in 2009 but never played for the big league club before hitting free agency in 2015 and inking a deal with the Baltimore Orioles in November that year.

But just a few weeks later, the Los Angeles Angels selected Choi in the Rule 5 draft. He made his big league debut with the Angels in 2016.

Choi then joined the New York Yankees as a free agent in 2017 and appeared in six games for the Bronx Bombers that year.

He hopped over to the National League to sign with the Brewers before the 2018 season and played in 12 games in three different stints before Sunday’s trade.

On Saturday, Choi hit a pinch-hit, go-ahead grand slam that put the Brewers ahead 6-3 in the sixth inning. The Brewers went on to win 12-3.

It was Choi’s second homer of the season. For the season, Choi is batting .233 (7-for-30) with two homers and five RBIs in the majors. He was batting .302 with five home runs and 23 RBIs in 40 games with the Triple-A Colorado Springs.

The 27-year-old made the Opening Day roster but was optioned to Triple-A after just one game. With injuries to first baseman/outfielder Ryan Braun in mid-May, Choi was brought up for a five-game stretch, during which he went 3-for-14 with a home run and an RBI.

Choi was called up earlier this month ahead of the Brewers’ five-game interleague road trip against the Chicago White Sox and the Indians, so that he could serve as the designated hitter. He started four of those five games as DH but went just 1-for-13 with seven strikeouts.

Choi stayed with the Brewers as they returned to National League action and went 2-for-2 with the slam in two games against the Phillies.

But with regular first baseman Eric Thames expected to return from his left thumb injury this week, Choi would have stayed in Triple-A for the foreseeable time with the Brewers.

And the situation isn’t that rosy for Choi with the Rays either, as they’re looking to give Jake Bauers, a highly touted prospect, a long look at first base, and veteran C.J. Cron is another option at that position.