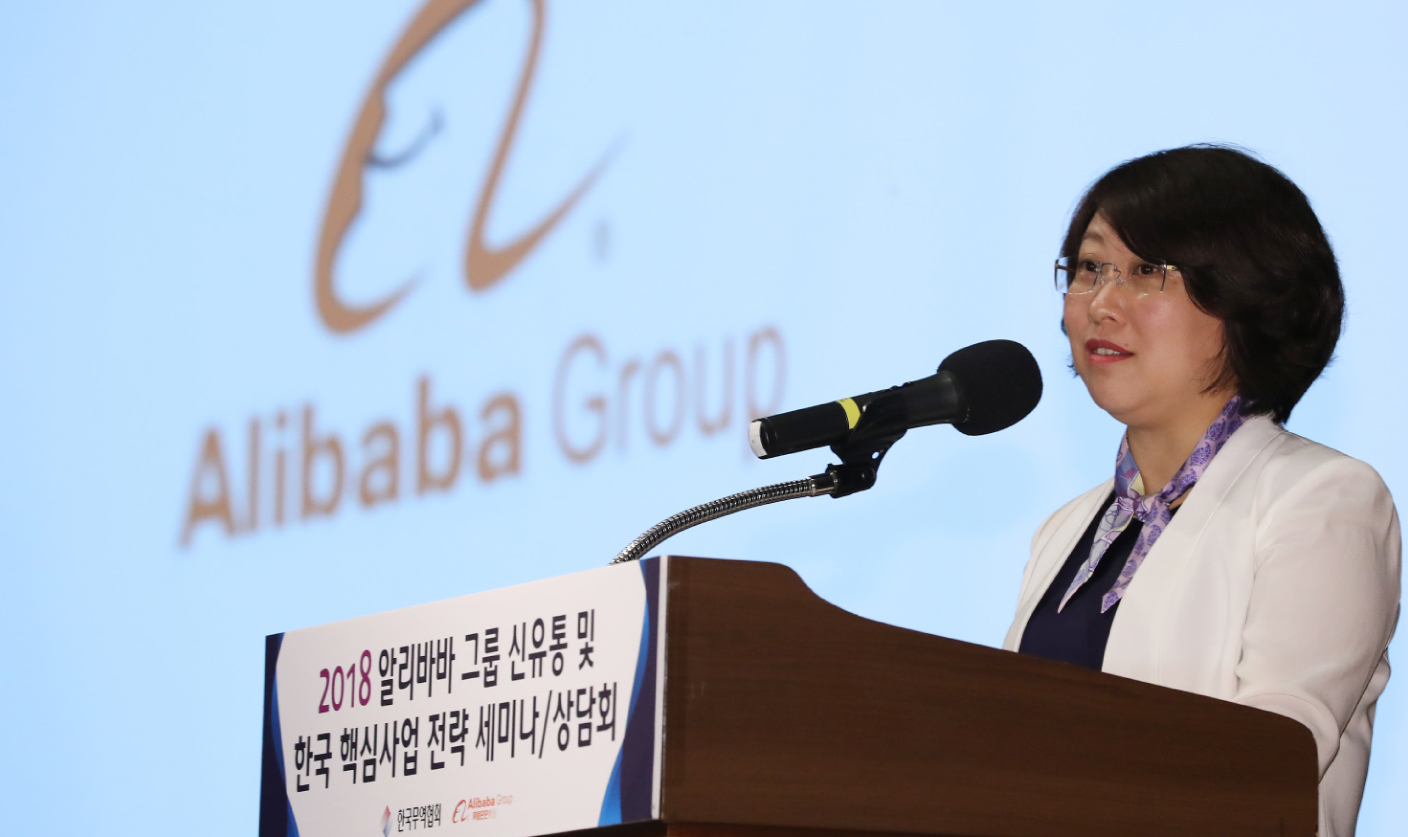 Vice President Angel Zhou of Alibaba Group introduces the company’s strategy at a seminar at COEX in Gangnam, southern Seoul, on Monday. [YONHAP]

Chinese e-commerce giant Alibaba Group announced Monday that it will expand partnerships with Korean brands in line with a Chinese government initiative to increase imports over the next few years.

“During international forums such as Davos or Boao, President Xi Jinping has announced multiple times that China will expand exports - [the government] plans to import $8 trillion in the next five years and the China International Expo will take place in Shanghai this year,” said Angel Zhao, the group’s vice president, at a seminar held by the company on Monday at COEX in Gangnam, southern Seoul.

“Under such import policy, Alibaba’s platforms like Tmall, Tmall Global, Taobao and others will be a useful tool for our partners to introduce their products to Chinese consumers.”

Established in 1999, Alibaba Group is an IT giant that runs multiple e-commerce sites like Tmall, Taobao, Alibaba Express and the payment service Alipay. In 2014, it launched a Korean office aimed at expanding partnerships in Korea, but Monday’s event was the largest event it has ever held here, with some of its top executives from the China headquarters attending.

Korean brands in Tmall Global, a website that mainly sells products from foreign companies, saw an annual sales growth rate of 45 percent between 2015 and 2017. This placed Korea as the No. 4 exporter to the website last year, following Japan, the United States and Australia.

Alvin Liu, a general manager of Tmall’s import and export business, said he still sees potential for Korea’s beauty products to grow through Chinese e-commerce, which is currently dominated by jiulinghou, meaning consumers born in the 1990s.

“Over 90 percent of Tmall Global’s users are jiulinghou, and in China there are 174 million people in this generation, which as a country would rank the eight largest in the world by population,” he said.

“Data analysis [from our platform] indicates that this generation is particularly interested in expressing themselves in front of others and they’re starting to look for beauty products on a global scale - this is a big opportunity for Korea because it has an advanced market in the sector.”

As an incentive for potential partners, both executives suggested that a partnership with Alibaba will offer opportunities to tap into both online and brick-and-mortar stores in China, including its in-house offline retailers like the grocery store Hema. Alibaba has been investing in a “New Retail” strategy, which is to expand offline services to create synergy with its online business. Earlier this year, Tmall opened its first store exclusively comprised of imported goods in Hangzhou.

Zhao added that Alibaba could be the gateway to Southeast Asian countries as well through Lazada, a leading e-commerce website in the region which the Chinese company acquired shares of in 2016.

“A priority for us [in the search for Korean suppliers] is to export products that are unique and trendy,” said Danny Chung, Alibaba Group Korea’s general manager. “From that perspective, diversification of product sectors apart from beauty and fashion is also important.”

Soccer fans love Ghana and the chocolate named after it