Moon optimistic on eve of ‘the encounter of the century’

Moon optimistic on eve of ‘the encounter of the century’ 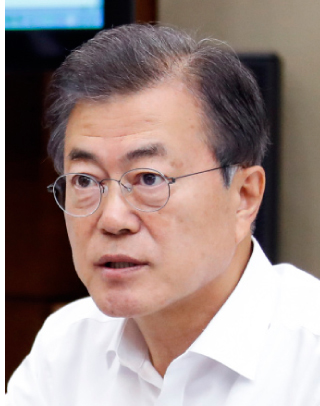 President Moon Jae-in expressed high hopes for today’s summit between North Korean leader Kim Jong-un and U.S. President Donald Trump, calling the meeting between the two “the encounter of the century” on Monday.

“I hope the summit will produce agreements related to the denuclearization of the Korean Peninsula and put an end to confrontational relations [between Washington and Pyongyang],” Moon said at a senior secretariat meeting at the Blue House.

The president credited the “bold decisions” from Kim and Trump that made the meeting in Singapore possible.

“President Trump put into action his strong resolve to set in place a peace plan on the Korean Peninsula and solve the North Korean nuclear problem,” said Moon, referring to the U.S.-led international sanctions campaign imposed on the North in response to its nuclear and long-range missile tests.

Moon said that Kim showed a will to get rid of his nuclear weapons through pre-emptive denuclearization measures, such as the North’s demolition of its Punggye-ri nuclear testing site in North Hamgyong.

“I look forward to audacious decisions by the two leaders as they accept each other’s demands [at the summit meeting], so that the hopes held by people around the world for a peaceful era on the Korean Peninsula can be realized,” Moon continued.

While he was positive about the outcome of the summit, Moon also cautioned that one meeting could not end the long history of hostility between the two countries.

“Relations defined by confrontation and North Korea’s nuclear problem will not be solved in one shot at one summit. They call for a long process that may take one year, two years or longer to completely resolve the issues, even after the two leaders have initiated communication,” Moon said.

“To complete that process, sincere effort from the two Koreas, the United States and sustained cooperation from neighboring nations is required. We need to take a long breath so we can finish that process,” Moon stressed.

Moon asked the Korean people to remember that they are “direct stakeholders” on Korean Peninsula issues “under any circumstances,” echoing his remarks from last year that there would be no military action in Korea without his government’s consent.

A senior Blue House official said Sunday that it would be “unlikely” for Moon to join Trump and Kim in Singapore to formerly declare an end to the 1950-53 Korean War, which ended in a truce rather than a peace treaty. Despite this statement, speculation that Moon could make a last-minute trip to Singapore today continued on Monday.

Moon spoke with Trump for 40 minutes on the phone from 4:30 p.m. on Monday. He again credited Trump with making the Singapore summit possible, citing the U.S. president’s “resolution and strong leadership,” according to Blue House spokesman Kim Eui-kyeom.

Trump updated Moon on what the United States and North Korea had discussed up to that point, and the two discussed ways to make today’s summit a success.

Trump said he would send U.S. Secretary of State Mike Pompeo to Seoul right after the summit to brief Moon on the outcome, according to Kim. A senior Blue House official also said the two talked about a declaration to end the Korean War, though he did not elaborate on the subject.