Hanwha dusts off old No. 35 jersey

Hanwha dusts off old No. 35 jersey 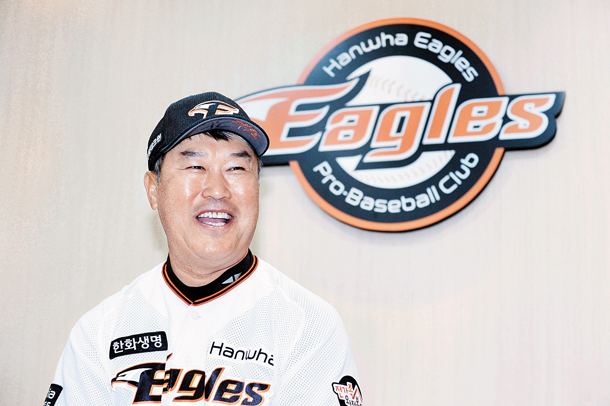 The Hanwha Eagles No. 35 jersey is flying off the shelves down in Daejeon this season, with the popular kit often going out of stock. The uniform, worn by Jang Jong-hoon from 1986 to 2005, is back in high demand after the popular player returned to coach the Eagles and resurrected his old number. 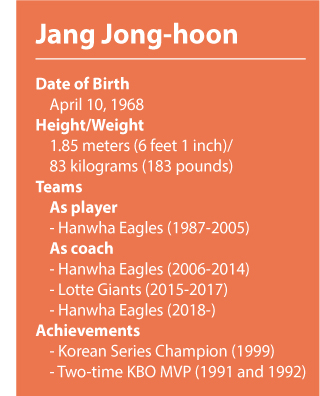 When manager Han Yong-duk was appointed to lead the Eagles’ after the 2017 season, the first move he made was to bring back old franchise stars - Jang and Song Jin-woo - as coaching staff to build stronger teamwork among players.

Jang and Song, back in Eagles’ black and orange - although in coaching jerseys - were quick to bring their old numbers out of retirement.

“I think this is the first time in baseball to re-use the retired number,” Jang said. “I know Shigeo Nagashima [a legendary player in the Japanese baseball league] wore number 3 rather than 33 when he returned as a manger.”

Jang joined the Eagles as a coach shortly after his playing career ended, but quit in 2014 when Kim Sung-keun was appointed as manager. He joined the Lotte Giants’ coaching staff.

“I couldn’t sleep the night before I left,” Jang said. “I was excited that I was starting something new but was also sad that I was leaving home.”

Though Jang got criticized by the fans as a coach, his ability eventually got recognized in 2015, when Kang Min-ho hit a career high of 35 home runs in a single season and Kim Moon-ho finally became the Giants’ starting left fielder.

“I learned a lot through my three years with Lotte,” Jang said. “Even when I was wearing a Lotte uniform, I automatically paid attention to the Hanwha players. I have a soft spot for the team. So now, I try to provide a comfortable environment for the athletes to train and play games.”

Despite Jang’s years of commitment to the Eagles, the fans weren’t impressed when he returned as a coach in 2017. They thought that Jang and Song didn’t have enough experience for the job.

“I hesitated at first,” Jang said. “But to bring back the Eagles, I accepted the offer as a coach. Until the opening day, we had a lot of concerns.”

Since the Eagles played so bad in recent seasons, fans believed that the coaches were given the title just because they used to play for the club.

“I was really sad to hear that,” Jang said. “We can laugh about it now because we’re playing well, but at the time, it was really difficult.”

The criticism didn’t last long. As the Eagles are soaring to new heights this season the fans have quickly changed their tune. Jang’s uniform is now one of the best sellers in the team store.

For the Eagles, Jang serves two roles. His primary role is to serve as the voice of the players as the head assistant coach, a middle man between the players and Han.

“Since our manager trusts the coaches and the players, we are freely expressing our opinions,” Jang said. “I probably talk to the manager more than my wife.”

When joining the Eagles this season, Jang recommended outfielder Kim Min-ha, who he watched while coaching for the Giants.

Jang is also a batting coach. Rookie Jung Eun-won is a notable infielder that Jang has been coaching. Before Jung, the Eagles’ foreign player Jared Hoying also improved under Jang’s coaching. Rather than telling Hoying to fix his open stance, Jang told Hoying to try to push the ball when swinging. With the help of Jang, Hoying is now one of the best batters in the league.

“When I was a player, it was hard to understand the coaches when they just told me to do it without any further explanations,” Jang said. “I try to listen to the players more.”

While Jang was playing for the Eagles the team only won the Korean Series once in 1999, but regularly played in the postseason. That luck ran out pretty soon after Jang left - the Eagles haven’t made it to the postseason since 2007.

“Our team is determined to get to the postseason for the fans that have waited for us all this time,” Jang said.