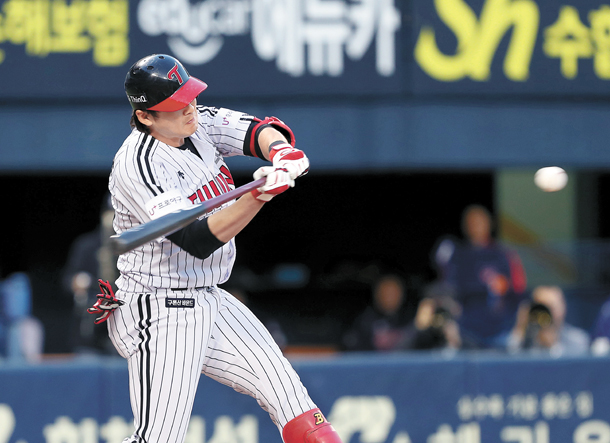 Lee Hyung-jong of the LG Twins swings a bat during a game against the Lotte Giants at Jamsil Baseball Stadium in southern Seoul on May 8. [YONHAP]

The LG Twins had a tricky start to the season after outfielder Lee Hyung-jong was injured in spring training. Now that the starting batter has rejoined his squad the Twins are quickly climbing the league and vying for a spot in the postseason.

“I learned that baseball is the only thing I’m good at,” Lee said.

Lee started his career as a pitcher, before switching to batting in 2015. Over the last three years he has proven his worth, rising through the ranks to become the Twins’ starting batter.

Lee has played in 44 games this season as of Wednesday night, and has a batting average of 0.378 with five home runs and 23 RBIs. Despite his late start to the season due to a knee injury, Lee has the third best batting average in the KBO.

Though Lee started his season later, he has once again established himself as a crucial part of the Twins’ batting line-up with an on-base percentage of 0.446.

“It is all thanks to manager Ryu Joong-il for trusting me,” Lee said. “His trust allowed me to get stronger mentally and lead me to great batting.”

Lee first made a name for himself in high school. In the 2007 high school baseball championship Lee made headlines when he pitched for Seoul High School in two consecutive games. Lee threw 147 pitches during the semifinal game, and then returned to the mound in the final the following day. Lee’s school ultimately lost to Gwangju Jeil High School after he allowed a hit. A video of him crying on the mound is still available online.

“I still watch that clip and question myself ‘Why did I cry?’” Lee said. “It’s embarrassing. When I was little, I was very competitive [about everything]. Now, I try to be competitive only about baseball.”

After graduating high school, Lee was drafted by the Twins, signing for 430 million won ($397,380) in 2008. Despite the high expectations the club had, Lee wasn’t able to make his debut right away as he underwent elbow surgery. Lee eventually made his KBO debut in 2010 and picked up a win. After falling out with the Twins’ front office, Lee abruptly retired from professional baseball at 21 years old.

With his baseball career cut short, Lee attempted to establish himself as a professional golfer.

“Since I switched my position from a pitcher to a batter, I felt more pressure to play well,” Lee said. “It was difficult, mentally. For four months after the season, I focused on finding my problem.”

While he was in a slump last season, Lee only thought of baseball, even dreaming of playing baseball while asleep. Lee said he was scared that he would miss his chance.

“I still have a long way to go,” Lee said. “I still haven’t shown my all as a batter. If my first home run as a batter [during an exhibition game in 2016] was at 10 percent, I think I’m now at 40 or 50 percent. I need to be consistently good for the next four to five years. I’m doing well now but I’ll get in a slump. My goal is to be consistent even during a slump. More than anything, I want my team to keep on winning.”