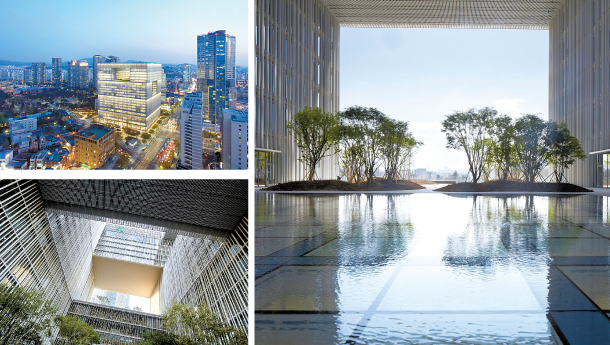 Top left: A night view of Amorepacific’s new headquarters in Yongsan, central Seoul. Bottom left: A view from the building’s courtyard on the fifth floor. Right: A pond at the center of the courtyard’s roof garden. [AMOREPACIFIC GROUP]

Amorepacific’s glittering new headquarters was one of the biggest architectural projects to open in Korea last year. The massive, cube-shaped building has redefined the once run-down area around Yongsan Station in central Seoul.

English architect David Chipperfield, the designer behind the new Yongsan landmark, said Thursday that the building strives to convey a sense of community, not just to Amorepacific employees, but to society as a whole.

“If the building, as a workplace, contains more than just desks for people to do their daily work, but also social spaces where people might meet or kindergartens, cafes and so on - if you imagine doing this is in a tower, it’s not so easy,” he said. “The concept of a cube gave us the possibility we might be able to make a more convincing concept of community, much easier than if it would have been a tower.”

Chipperfield was inspired by moon jars, Korean white round water jars from the Joseon Dynasty (1392?1910). Chipperfield said the jars have a “confident stability” similar to that of the building. He first encountered moon jars while collecting ceramics during a trip to Korea in the late 1980s.

Amorepacific’s new headquarters is defined by a sense of openness. The building features cubes of empty space set into its design, and its lobby has four doors opening from all directions that lead into a single hall. Four floors of the building, from the basement to the third floor, are filled with museums, cafes and commercial facilities that are open to the public. 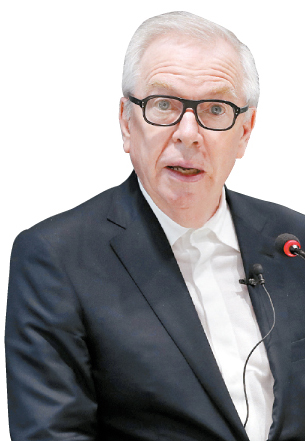 “I think this was a theme throughout the project - the idea of a workplace is not just somewhere where you come to work but a place where you spend a lot of your time,” he said. “How you work with each other, how your company relates to society - these were things very important to [Amorepacific Chairman] Suh [Kyung-bae].”

Another architectural feature highlighted by Chipperfield was the building’s fifth-floor courtyard. This open space faces the neighborhood, and isn’t blocked by any other buildings. He explained that the space creates a relationship between the city and the building, while also allowing more daylight and ventilation into the offices.

Chipperfield said he was impressed at how Suh was willing to talk about the project from not only a commercial perspective, but also in terms of creating a quality workplace for Amorepacific’s employees.