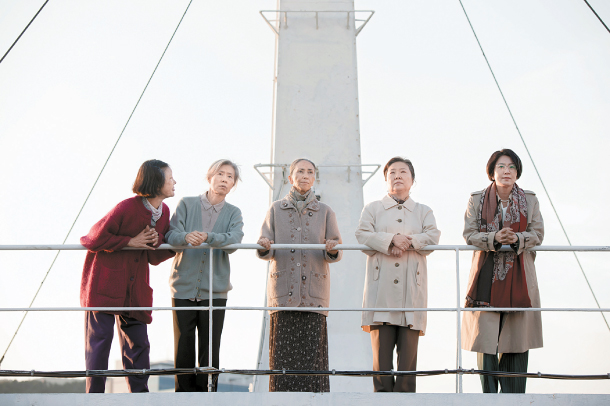 “Herstory” tells the story of so-called comfort women, a euphemistic term for victims of Japan’s wartime sexual slavery, and their legal battle against the Japanese government over the course of six years starting in 1992, led by a charismatic business woman from Busan, played by Kim Hee-ae, far right. [NEXT ENTERTAINMENT WORLD]

Over the last week, local theaters have been filled with female-led films. The star-studded “Ocean’s 8,” featuring high profile actors like Sandra Bullock and Cate Blanchett, has arrived in local theaters with much acclaim while the Amy Schumer-led comedy “I Feel Pretty” is receiving attention from local moviegoers. In line with the trend, local period movie “Herstory” is scheduled for release on June 27.

Dealing with a heavier and more sensitive topic than the other female-led films in theaters, “Herstory” centers on the so-called comfort women, a euphemistic term for victims of Japan’s wartime sexual slavery during World War II. The film depicts the fierce legal battle these women embarked on against the Japanese government over the course of six years in the 1990s to demand an official apology and reparations.

Based on a real-life incident, the court trial yielded a rare and meaningful ruling that ordered the Japanese government to compensate three plaintiffs 300,000 yen ($2,728) each, although the plaintiffs’ demand for official apology was rejected. The ruling was later overturned by higher courts.

Set in the port city of Busan in 1992, the film opens with the introduction of ambitious businesswoman Jeong-suk (Kim Hee-ae), who heads a Busan-based tour agency. A single mom without the skills to get along with her teenage daughter, she preoccupies herself with work while leaving her daughter with an older, reticent housekeeper named Jeong-gil (Kim Hae-sook).

When her business staggers following an employee’s mistake, Jeong-suk, along with members from a regional association of female entrepreneurs, decides to temporarily establish a hotline for comfort women in her office. 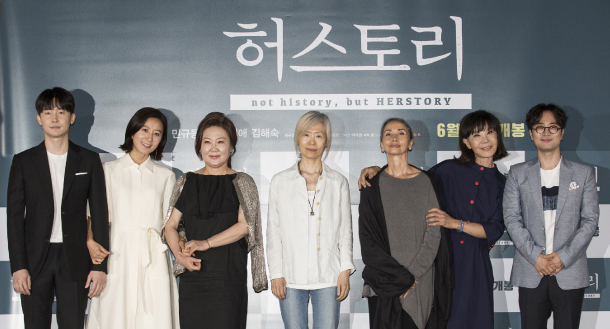 Though Jeong-suk originally vows to provide the service for only three months, she gradually becomes deeply involved in the project, especially after Jeong-gil comes forward as a victim.

A sensitive topic that still remains to be resolved between the two countries, many movies telling the story of comfort women have appealed to emotions.

“Spirits’ Homecoming” (2016) and “Snowy Road” (2017) depicted the heavy stories by traveling in time between the victims’ past and the present, embodying the comfort women’s painful memories through one or two characters. “I Can Speak” (2017), starring Na Muni, relied on comedy for the most part, but it became heavy on the sentimentalism towards the end.

“Herstory” diverges from the other movies by taking a more realistic approach that could appeal to audiences and contribute to solving the still-controversial issue.

By basing the film off of a real-life trial instead of bringing up the victims’ painful past, the movie functions as a guide to how viewers can approach solving the issue, according to Kim.

Instead of relying on flashbacks to highlight the tragedy of the victims, “Herstory,” starring veteran actors like Ye Su-jeong, Moon Suk and Lee Yong-nyeo as the victims, devotes its two-hour running time to the women’s mentally and physically exhausting legal battle in Japan, led by Jeong-suk. Though the women’s testimonies are mostly presented in a calm manner, some moments get quite emotional.

In one scene, for example, Jeong-gil fearlessly screams in the courtroom, saying “Take me back to when I was 17 years old!” But the movie quickly returns to its measured tone when the character urges the Japanese government to at least apologize for their violence, since the clock can’t turn backwards.

Though “Herstory” differentiates itself from the previous comfort women movies with its toned-down feature, its complete reliance on the victims’ words in the courtroom could be seen as weakening the delivery of the women’s suffering.

“Regardless of the genre, the essential part of movies revolving around comfort women is how efficiently the victims’ voices are delivered to audiences,” said film critic Kim Hyung-seok. “If audiences can’t fully sympathize with the pain of these women by the time they leave the theater, the movie is not fulfilling its purpose.”