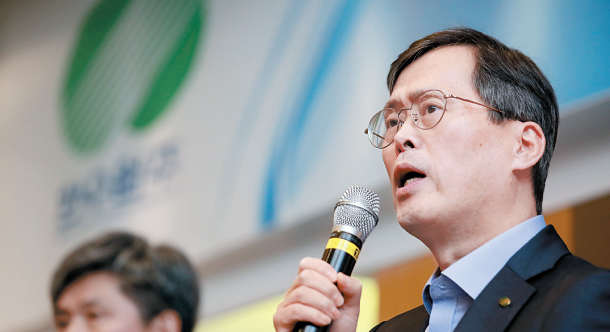 Chung Jae-hoon, president and CEO of Korea Hydro & Nuclear Power, announces a plan to close the Wolsong-1 reactor before the end of its life cycle on Friday. [YONHAP]

Korea’s nuclear power operator will close the Wolsong-1 reactor before the end of its life cycle and nullify the construction plans for new four new plants, its chief executive said on Friday.

Chung Jae-hoon, the CEO of Korea Hydro & Nuclear Power (KHNP), said its board of directors approved the plans in line with the government’s nuclear phase-out plan.

The 30-year operational life cycle of Wolsong-1 in Gyeongju, North Gyeongsang, ended in 2012, but it was extended for another 10 years to 2022. It is now the nation’s oldest reactor, following the permanent shutdown of Kori-1 in June 2017, and has remained idle since May for maintenance. Its power generation accounts for a mere 0.6 percent of the country’s total, according to the company.

The Shin Hanul 3 and 4 units, scheduled to be built in Uljin County, North Gyeongsang, received construction approval in February 2017, while the process to push for the Cheonji 1 and 2 units in Yeongdeok County, south of Uljin, did not proceed far.

The KHNP said it will ask the government to compensate its costs after conducting legal reviews.

“The board of directors agreed that [the KHNP] should ask the government for compensation on legal and reasonable losses,” Chung said. “The government said it will review our request based on related regulations.”

The government has pledged to scrap new nuclear programs and won’t extend the life cycle of existing facilities to decrease the number of reactors to 14 in 2038. It was included in the government’s long-term energy supply plan in December.

Korea currently has 24 nuclear reactors to generate about one-third of its electricity, and two more are under construction.