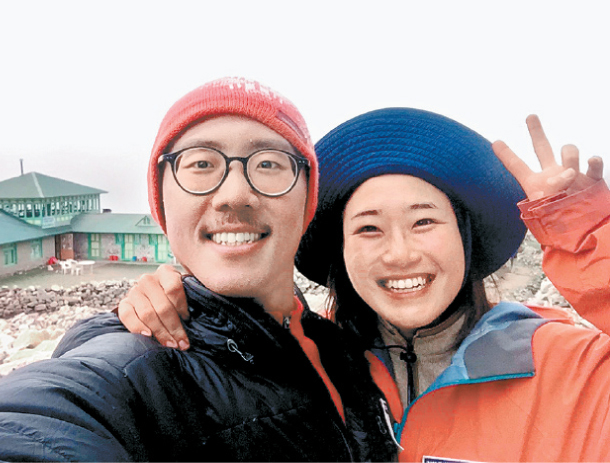 Jeon Jae-min, who successfully scaled Mount Everest on May 15, considers himself lucky.

“The weather before and after the climb was good,” he told the JoongAng Ilbo, “and I could manage to climb without the help of ladders after the Hillary Step collapsed following the earthquake” in 2015.

The Hillary Step refers to a nearly vertical rock face located at the top of Mount Everest about 8,790 meters (28,800 feet) above sea level. It is named after Edmund Hillary, the first known person to scale the rock face en route to the summit. The Hillary Step is the last real challenge before reaching the top on the southeast route.

Including Jeon, 137 Koreans have scaled Mount Everest, but only a few make it to the top. Barely one in a million succeed, which is why climbers who reach the summit are treated like heroes.

“I would rather consider myself a traveler who loves mountains and nature rather than a professional climber,” Jeon said. “Climbing Mount Everest was part of my YOLO mind-set. I don’t want to impose too big of a meaning.”

Jeon said he would not have been able to climb Mount Everest without the help of his wife, Kim Song-hee, a video producer. While he was making his way to the top, Kim managed the base camp at 5,300 meters and was responsible for filming and editing videos of the feat.
The two met on an excursion of remote areas led by the Korean Alpine Federation in 2012. They climbed Qinghai’s Yuzhu Peak (6,224 meters) in China. Kim was filming at the time, too. They failed to summit the peak, but they found each other and married in 2016.

For their honeymoon, they spent a year traveling across Southeast Asia, India and Eastern Europe. They slept with red ants in a bungalow in Laos and biked around plateaus as high as 5,000 meters above sea level for 10 days in northern India. Last October, they climbed Mount Elburs, the highest peak in the Caucasus at 5,610 meters. They were able to withstand the hunger and pain, Jeon said, because of all the traveling they had done since marrying.

Since March last year, the couple has been posting videos of their trips every week on the JoongAng Ilbo’s website. The videos, shot with multiple cameras and drones, have become a hit on YouTube and other social media sites.

The couple is a typical example of the so-called “880,000 won generation,” referring to average monthly salary of non-salaried workers among Korea’s younger generation. But they have never felt poor just because they earn less.

“My husband sometimes earns 300,000 won a day from part-time filming,” Kim said, “but his average monthly income is less than 1 million won. Our income, though, is on the rise nowadays.”

The couple had a sponsor for their Mount Everest trip. Pion-Tech, a Korean cosmetics manufacturer, paid the permit fee of $11,000 per person. In return, Kim ran a small cosmetics shop at base camp. She called it “the highest cosmetics store” on earth.

“Korean cosmetics were popular in the Himalayas as well,” she said. “Climbers from China and Europe visited every morning to try Korean cosmetics including sunscreen. I sold several.”