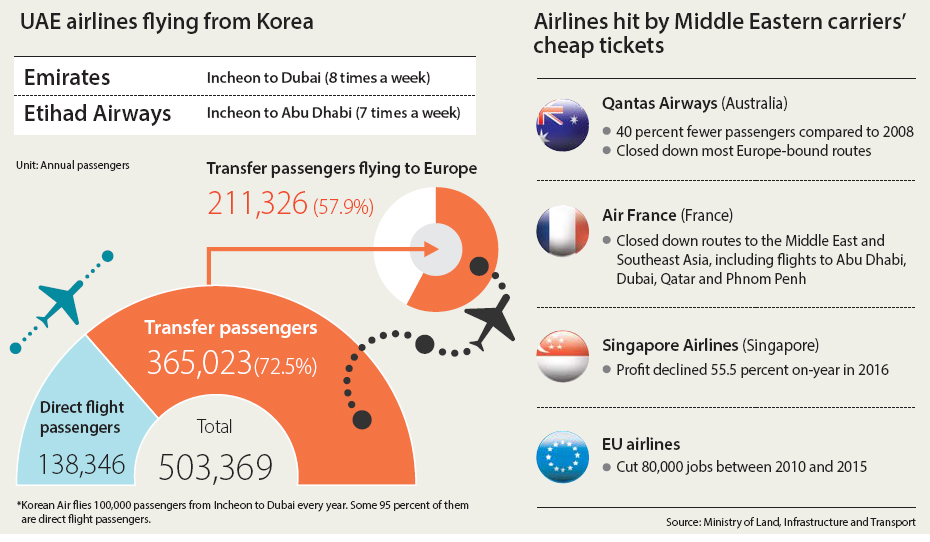 Across the world, state-backed Middle Eastern airlines have squeezed out domestic competition with low ticket prices, and the United Arab Emirates is now determined to expand its footprint in Korea.

Government officials from the United Arab Emirates and Korea will meet in Abu Dhabi June 26 to 27 to discuss increasing flight frequency between the countries, the Ministry of Land, Infrastructure and Transport said on Sunday. The meeting follows UAE airlines’ recent request that Korea double the number of Emirati flights flying out of Incheon.

The Korean aviation industry, however, is worried about competition from the already fast-growing Emirati presence.

Emirates and Etihad Airways fly routes from Incheon to Dubai and Abu Dhabi at least once a day. Korean Air is the only domestic carrier that flies to Dubai. Emirates also flies the largest plane between Dubai and Incheon - the Airbus A380.

Emirati carriers attract many Europe-bound travelers from Korea with their cheap fares. By stopping at Dubai and Abu Dhabi en route to Europe, they can offer tickets for 30 percent less than the prices charged by domestic carriers.

Transfer passengers heading to Europe from Incheon with UAE-based airlines are equivalent to about 13 percent of the total number of passengers flying with domestic carriers on direct flights to Europe. If transfer passengers using other Middle East-based carrier like Qatar Airways and Turkish Airlines are included, that number jumps to 35 percent.

“We’ll be hit even harder if UAE airlines increase their flight frequency,” said Kim Tae-joon, a senior manager at Korean Air. “At the moment, we don’t even have a solution to address flight fare competition from Gulf carriers.”

“Even if we increase the number of flights flying to Europe, Middle Eastern airlines pull away Europe-bound passengers with their cheap fares,” said Jin Il-nam, a senior manager at Asiana Airlines. Asiana has recently focused on expanding its range of long-haul flights, as low-cost carriers have started to dominate shorter routes.

“The Gulf carriers are only offering cheap fares for routes where they have rivals,” said another aviation industry spokesman. “On routes that they monopolize, they charge rates comparable to other major airlines. Though their fares may seem cheap now, they’ll begin charging more once competition disappears.”

Korea isn’t the only country feeling pressure from the Gulf, however. Australia’s Qantas Airways, for example, had to close down several routes to Europe due to competition from Middle Eastern carriers. Instead, the airline is now flying Australians from all corners of the country to major airports, where Gulf carriers can then fly them to Europe.

Air France has also dropped many routes to the Middle East and Southeast Asia due to Middle Eastern competition, cutting thousands of jobs in the process. It is estimated that some 80,000 jobs in the EU airline industry disappeared between 2010 and 2015 - industry data shows that some 1,500 to 1,900 jobs are lost for every flight route that shuts down.

Recently, Delta Air Lines and other major American airlines have started demanding that the U.S. government provide a policy solution that will allow them to compete fairly with Gulf-based carriers, which their governments are believed to subsidize with billions of dollars.

“In a free market economy, customers will naturally choose to purchase cheaper flights that fly out at convenient times,” said Kim Byung-jong, a professor of transport, transportation and logistics at the Korea Aerospace University.

“If we just promote the principles of the market economy, our entire airline industry may crumble,” said Kim Yeon-myung, the vice chairman of the Korea Transport Institute. “We may be hit with irrevocable injuries like the large-scale loss of high-quality jobs if we open up the airline market out of political considerations.”

The domestic airline market may see major changes depending on what deals the Land, Infrastructure and Transport Ministry authorities make during the upcoming meeting in Abu Dhabi.

“It is true that many countries have been hit by competition from airlines in the Middle East,” said Joo Hyun-jong, a policy manager at the ministry. “We will plan out a strategy to bring to the airline meeting after taking passenger convenience and the airline industry into consideration.”