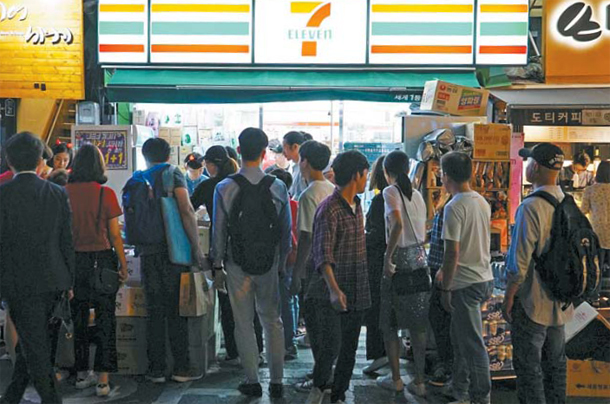 People line up in front of a 7-Eleven in Gwanghwamun in central Seoul on Monday ahead of the Korea-Sweden football match. [7 ELEVEN]

People across the nation watched the game on television or in public venues, and snacks and beverages are a necessary part of the ritual.

Major convenience stores and discount chains in Korea saw a whopping jump in sales of beer, snacks and fried chicken Monday evening when the national team was facing off against Sweden.

According to CU, Korea’s biggest convenience store chain, sales of beer at 50 branches near major public viewing venues such as Gwanghwamun Square in Seoul jumped by 511.2 percent on Monday evening compared to last Monday. Sales of ice cream jumped by 410.9 percent, and sales of dried snacks such as salted peanuts and dried squid by 370.4 percent.

From 6 p.m. to 12 a.m. Monday, overall sales at the selected branches jumped by 700 percent, according to the company. 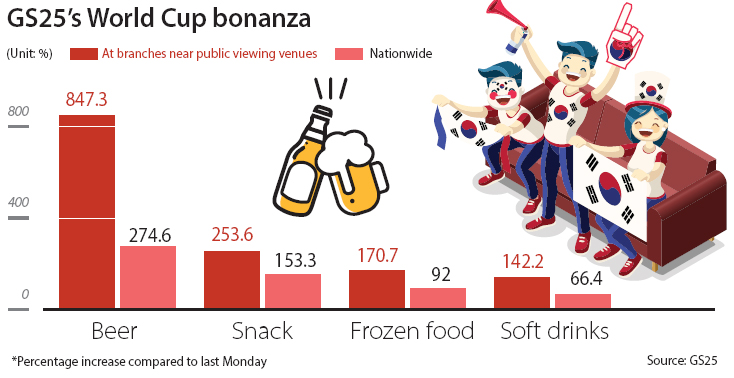 “Unlike previous World Cups, the Korean team’s matches at this year’s Russia World Cup mostly take place in the evening, which is a major reason behind such a significant increase in the sales,” said an official from BGF Retail, the operator of CU.

Korea’s largest discount chain Emart was another beneficiary of World Cup enthusiasm, seeing big jumps in sales of food and beverages. The classic combination of beer and fried chicken - called “chimaek” in Korean slang, a portmanteau of chicken and maekju, the Korean word for beer - flew off the shelves, according to the retailer.

Sales of beer increased by 61.2 percent compared to the same day in 2017 and fried chicken sales jumped by 79 percent.

Sales of both bottled and canned beers at branches nationwide jumped by 274.6 percent on Monday compared to last Monday. Snacks including chips and crackers saw sales more than doubling, increasing by 153.3 percent. Sales of frozen food increased by 92 percent and ice cream sales jumped 87.1 percent.

At 10 major GS25 branches near Gwanghwamun Square, where hundreds of people cheered on the team, sales of beer jumped by 847.3 percent while those of soju also jumped by 120.7 percent.

At 7-Eleven’s 10 branches nearby Gwanghwamun, sales of beer saw a 3,294.1 percent jump on Monday compared to the week before. Packed lunch boxes and gimbap (seaweed rice rolls) saw their sales rise by 223.3 percent.

“The Korean team lost its first match, but it still has a chance to get in the top 16 teams,” said a spokesperson for 7-Eleven Monday.

“We predict such sales growth will continue for a while longer, which is why we are trying to prepare enough inventory of popular items.”