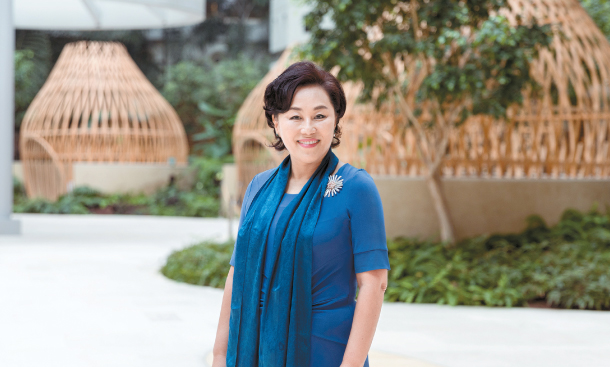 The annual Haevichi Arts Festival, which kicked off on Monday, celebrates its 11th year and this year has been the most “vibrant” festival yet, according to many heads of art centers across the country who have participated for many years. That was the plan President Kim Hye-kyung had in mind when she was appointed last year as the head of the Korean Cultural & Arts Centers Association (Kocaca), the organizer of the festival.

“Haevichi Arts Festival is a unique festival that acts as a platform where performing arts groups and leaders of art centers get together and network,” said Kim. “But to really help them network and get to know each other, we’ve newly adopted some programs this year, like the DJ party on opening night and doing yoga together the next morning.”

“The festival is where these people can officially lobby their work or centers, show what they can offer and be in a win-win situation,” she added.

To learn more about the festival, the Korea JoongAng Daily sat down with Kim for an interview on Tuesday at the Haevichi Hotel in Jeju Island. The following are edited excerpts from the interview.

Q. Some reports have said that the festival aims to become the Korean version of the Edinburgh Festival, but you seem to disagree. What exactly is the objective of the festival?

A. Aiming to become a festival that lasts long and is visited by a lot of people both from in and outside Korea would probably be the only aspect that we want to borrow from the Edinburgh Festival. Of course we have showcases during the festival, too, but showcasing performances is actually not our main objective. Maybe that can be our future goal, but right now, it is important for us to first vitalize performing arts centers across the country by introducing them to the diverse performing arts groups that exist locally. There are 236 performing arts centers in Korea and officials from about 200 centers came to this year’s festival. As for the performing arts groups, there are about a thousand groups, and for the festival, about 250 have participated. We hope the centers find the right groups and vice versa so that performing arts in Korea as a whole really becomes energized.

That’s right. Because the centers and groups all have to plan ahead, buying and selling don’t really happen on the spot. So we’ve adopted a provisional contract system in which centers can sign with a group they are interested in. It doesn’t have any legal binding, but if that provisional contract really becomes a contract, we try to offer support that can be provided by the Culture Ministry (Kocaca is an affiliate of the Culture Ministry.) It is difficult for officials from the centers and art groups to meet up and talk about their work or centers without any connection. By networking here, we hope to ease that process by being a good matchmaker.

The festival seems to have finally stabilized itself after 10 years. What improvements do you think you could make to achieve your goals?

Compared to previous years, there are a lot of people from performing arts centers across the country participating in the festival. However, since many of them are government officials who are appointed and serve short terms, many of them tend to have limited knowledge and not much interest in the arts and culture. It is important to continue to educate these officials and really familiarize them throughout the year so that both parties - the performing arts centers and the groups - can get the best out of this networking opportunity on this beautiful island of Jeju while it is isolated for at least four days from the hustle and bustle of their offices.