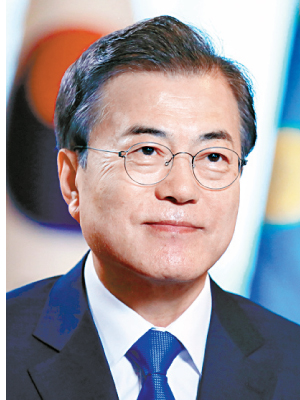 President Moon Jae-in on Wednesday described the kind of economic development possible among the two Koreas and Russia if a peace settlement takes place in the region ahead of a trip to Moscow.

In an interview with three Russian media outlets at the Blue House just a day before a visit to Russia, Moon cited railroads, natural gas and electricity as the industries that could get off to a fast start should North Korea’s economy open to international investment, which requires the withdrawal of United Nations sanctions.

The interview was jointly conducted by the state-run news agency Tass, broadcaster Russia-1 and the daily Rossiskaya Gazeta early Wednesday ahead of the first state visit by a South Korean president in 19 years and a summit with Russian President Vladimir Putin.

“North Korea could take part in bilateral [economic] cooperation between Russia and South Korea should a peace regime settle in the region,” said Moon, adding, “and that will lead to a tremendous boon to the North’s economy and national growth.”

Moon went on to name railroads, natural gas and electricity as three sectors that could be jointly developed right after the withdrawal of international sanctions on Pyongyang.

If the railroads between the South and North were reconnected, Moon noted, they could then be connected with railroads in Siberia, which in turn would make South Korea “connected to Europe, allowing transportation of goods” across the Eurasian continent.

Moon said such development could bring huge economic benefits to the two Koreas as well as to Russia.

Russian natural gas could be transported to both North and South Korea through underground gas lines. Moon also raised the possibility of transporting it further to Japan via a maritime tunnel in the East Sea.

Electricity generated by Russia could also be transmitted to the two Koreas and Japan in a similar fashion, he said, stressing such economic cooperation would facilitate “shared prosperity of the Eurasia Continent.”

Moon said bilateral economic cooperation between South Korea and Russia could expand into areas such as agriculture, fisheries, shipping ports and shipbuilding under what he defined as the “nine bridge economic cooperation,” a concept he unveiled last September at the Eastern Economic Forum in Vladivostok.

Moon’s hopeful economic blueprint is premised on North Korea following through on its promise of “complete denuclearization” made at the summit with the United States in Singapore on June 12. International sanctions imposed on the North barring foreign investment in the country can only be lifted after the North takes steps toward denuclearization.

Emphasizing the importance of Pyongyang’s commitment to complete denuclearization, Moon said, “The North needs to present a more detailed denuclearization program,” and pointed out that the United States should also present “comprehensive measures corresponding with” the North’s denuclearization moves.

So far, agreements forged in the two inter-Korean summits over the past two months and the June 12 Singapore summit have been carried out very rapidly, Moon said.

During the visit that begins Thursday and concludes with his return home Sunday, Moon will deliver a speech before the State Duma, Russia’s lower house of the Federal Assembly. This will be the first time a South Korean president has addressed the Duma since the two nations opened diplomatic relations in 1990.

Moon will attend the Korean national soccer team’s second Russian World Cup match with Mexico in the southern city of Rostov-on-Don Saturday. He will return to Seoul following the match.