Midfielder is inspired by other Asian teams

Midfielder is inspired by other Asian teams 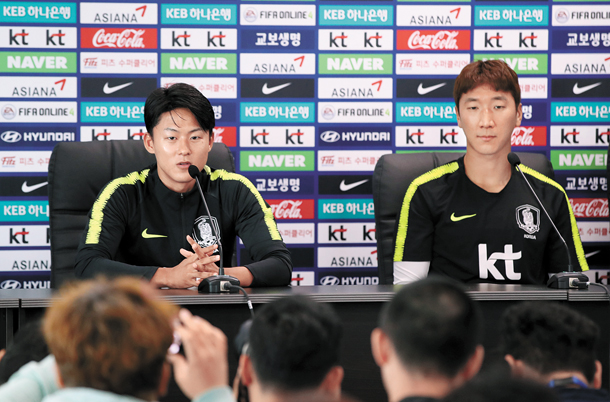 Although Saudi Arabia lost to the hosts Russia 5-0, Iran beat Morocco 1-0 and Japan stunned Colombia 2-1 in their World Cup opening matches. Korea dropped their Group F opener against Sweden with a 1-0 loss.

Jung said he hopes Asian teams can do well at the World Cup.

“Iran and Japan were our rivals on the continent, and we faced them, but we never thought about losing,” Jung said ahead of training at Spartak Stadium in Lomonosov, a suburb of Saint Petersburg. “But at the World Cup, I wish them to show good performances. Their recent matches have really stimulated us, making us think that we can make something happen at the World Cup.”

Jung played as a second half substitute in Korea’s 1-0 loss to Sweden in their Group F opener at Nizhny Novgorod Stadium in Nizhny Novgorod, Russia, on Monday. The Vissel Kobe midfielder entered the pitch in the 67th minute, two minutes after allowing a penalty kick goal to Sweden’s Andreas Granqvist. He replaced towering striker Kim Shin-wook, who made a surprising start for the match.

Jung, 28, said it was an honor to debut at the World Cup, but he had regrets because his team didn’t get the result they wanted. Korea now have to find out their fate against Mexico, the team that beat defending champions Germany 1-0 in their Group F opener, in Rostov-on-Don on Saturday.

“It’s a pity that we couldn’t get a good result against Sweden after all our hard work,” he said. “If I can play against Mexico, I will have to do the dirty work in the back to help our team.”

Jung said Korea will try to come up with its own strategy to beat Mexico, although he admits it’s not going to easy.

“Mexico have quick players who are good in one-on-one situations and like to penetrate,” he said. “Compared to the match against Germany, I believe Mexico will play differently against us. Of course, we’re also not going to fight like Germany.”

Korea is ranked 57th in the latest FIFA rankings, while Mexico sits at world No. 15. Korea is certainly underdogs, but Jung said the players are only thinking about their strategy to win against Mexico.

“You can compare the two teams on paper, but we know we have to produce results that can turn over people’s predictions,” he said. “We’re not thinking about whether we are less talented or not the better team against Mexico. We are just thinking about how we can stop Mexico from playing their style of game.”