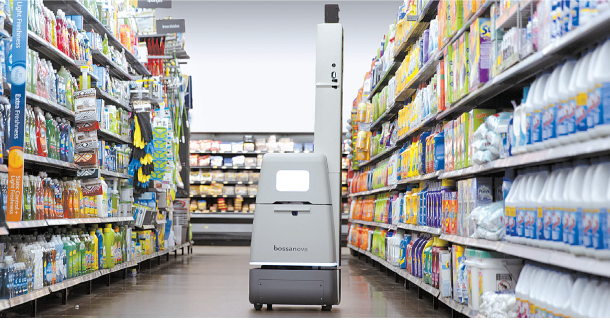 LG Electronics announced Friday that it has invested $3 million into the U.S. company Bossa Nova Robotics as part of its continued push into robot development.

This is LG’s first investment in a foreign robotics company. Bossa Nova Robotics, founded in 2005, creates service robots for the retail sector, and has almost 200 employees. It has expertise in computer vision, artificial intelligence and big data and works with retailers in the United States and Canada.

The company’s store inventory robots are already at work in the aisles of 50 Walmart stores in the United States. These two-meter-tall (6.56 feet) robots are capable of scanning for out-of-stock items, incorrect price tags and wrong or missing labels.

LG participated in a $29 million funding round in Bossa Nova led by Cota Capital, a California-based investment firm. LG said it acquired shares in return for the investment, but did not disclose exactly how much.

“We plan to enforce our capacity in robot development and search for future business opportunities through the investment,” LG said in a press release Friday.

Last year, LG launched two service robots that can provide information and clean at the Incheon International Airport. An LG spokeswoman said, however, that the investment in Bossa Nova wasn’t specifically intended to strengthen its service robot development.

“There are a lot of technologies applied in one robot,” she said. “The investment is not just about that specific store maintenance robot but is from a larger perspective that we want to find collaboration points, considering the many different types of expertise Bossa Nova has in robotics.”

LG’s investment in Bossa Nova comes less than a month after it announced that it would acquire a 20 percent stake worth 53.6 billion won in Robostar, one of Korea’s leading industrial robot companies.

Since May of last year, LG has acquired stakes in five robotics companies worth 67 billion won in total.