A missing girl and a man’s suicide baffle police

A missing girl and a man’s suicide baffle police 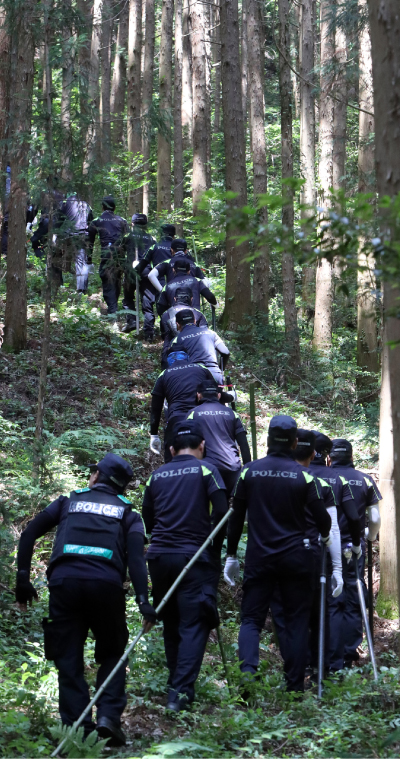 A female high school student in Gangjin County, South Jeolla, has been missing for six days, and a search operation involving 900 police officers, helicopters and drones is growing desperate.

Adding to the mystery of the case, the primary suspect, a friend of the student’s father, committed suicide a day after her disappearance.

The 16-year-old girl, whose name has not been revealed by police, was a first-year high school student living with her parents in Gangjin County.

On the afternoon of June 16, she told a friend through Facebook Messenger that she was going to nearby Haenam County because a friend of her father wanted to introduce her to a part-time job.

The student never returned home, and her worried parents reported her missing about an hour past midnight.

The next morning at 6:17 a.m., her father’s friend was found dead in a railway construction site near his house in Gangjin County. Police believe his apparent suicide was prompted by fears that authorities were hot on his trail.

Multiple elements in the case point to the now-deceased man as the most likely culprit, police said. Despite being well acquainted with her family, the man allegedly warned the girl not to tell anyone else about his job offer. Police added that one day before their meeting, the girl sent a text message to a friend telling her to “report [to the police] if anything happens to me.”

Early in the search, police used cell signals from the girl’s phone to track her movements on the day of her disappearance. The signals matched the route taken by the man’s car.

At around 2 p.m. on June 16, the girl sent her friend a Facebook message saying she was going with her father’s friend to look for a job and left home. The man, who lived nearby in the same county, was already parked about 600 meters (1,970 feet) away from her house, according to surveillance footage.

Cameras did not capture the girl going into the car, but later footage shows the car parked in a wooded hill.

At around 3 p.m., the girl’s friend sent her a message, but it was never read, the friend told police. Her phone was turned off soon afterward, based on a police analysis of cell signals.

Surveillance footage shows the man’s car back at his home in Gangjin County by 5:35 p.m. Other footage shows the man cleaning his car at around 5:50 p.m. and burning what appears to be articles of clothing. Investigators believe he may have been trying to get rid of evidence.

When the girl’s parents went to the man’s house to ask about her whereabouts, he hurriedly fled through the back door, police said. He allegedly told his family to pretend no one was home by turning off the lights. Surveillance footage later shows the man running across an alleyway.

The man had left his cellphone at work that day and shut off his car’s black box, suggesting meticulous planning. After searching his car, investigators found hair follicles, fingerprints and traces of burnt material, and sent the items to a forensics lab. So far, the police have not been able to find the girl’s possessions or any traces of her blood in the vehicle.

Despite a massive search operation, the police have had no luck finding the girl. They have narrowed their search to a wooded hill where the final signals from the girl’s cellphone were transmitted, but police are conducting additional dive searches in a nearby reservoir.