SHIM JAE-WOO
*The author is a New York correspondent of the JoongAng Ilbo. 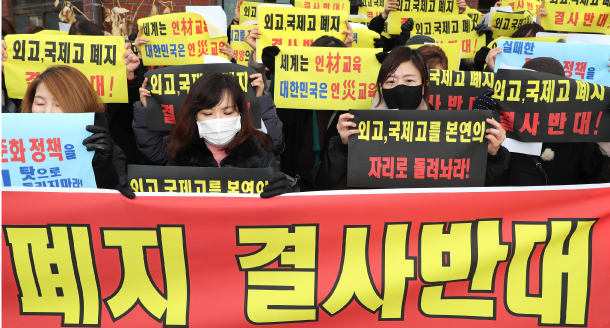 Progressives won in school district races across the country on June 13, and now, starting with Seoul, elite specialized high schools will likely lose their status one after another. On the other side of the globe, a similar debate is brewing.

In New York City, eight specialized high schools admit students solely on their performance on one test, the Specialized High Schools Admissions Test. About 62 percent of the students at these schools are Asian-American, while white students make up 27 percent. Black and Hispanic students comprise just 10 percent.

Although Asian-American students make up more than half the population at specialized high schools, they represent about 16 percent of the city’s public school population. By comparison, black and Hispanic students represent nearly 70 percent of public school students. The disparity has raised questions about the test’s fairness.

This year, Mayor Bill de Blasio said he intended to change the test to give black and Hispanic students a fairer chance at quality education. In protest, Asian-American groups, including many Korean-Americans, held rallies opposing the plan. Many alumni and parents with children at these high schools have also protested.

The specialized high schools are the best opportunity that many working-class, Asian-American students can get. Since private school is expensive, getting rid of the test could be a disservice to the Asian-American population and deprive them of a chance at free, quality education.

For now, a plan to abolish the test within this year has died in the New York State legislature, which has purview over the issue. On June 6, the State Assembly’s education committee proposed a bill to eliminate the test, but the legislature as a whole has opted to postpone a vote to next year. In New York, the debate over whether to keep or scrap the test will surely intensify.

The aim of a global education is increasingly focused on diversity and creativity. It would be a loss for a Korean student talented in science to fail to get into a school of choice just for being Asian. In Korea, specialized high schools that are only used as mere tools to get into a top college regardless of their focus will not have global competitiveness.

Both New York and Korea need to review whether those high schools are operating according to their original purposes for the happiness and competitiveness of students with creativity and talent in special fields of study.