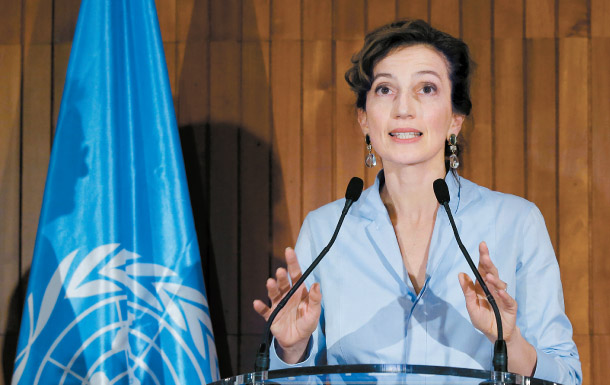 Days of multilateral cooperation are not behind us, says Director-General of UNESCO Audrey Azoulay, a speaker at the 13th Jeju Forum for Peace and Prosperity and the first incumbent head of the UN organization to join the forum.

“None of the major challenges facing the world today can be met by any one country on its own without relying on the fundamental pillars of science, education and culture,” Azoulay said, according to UNESCO. “Thus, UNESCO can and must fully participate in a world order based on multilateralism and humanist values.”

Azoulay will be speaking in the session, “UNESCO’s Unique Mandate for Peace and Development: Multilateral Cooperation through Education, Culture and the Sciences,” at 10:50 a.m. on Thursday at the Tamna Hall of the International Convention Center Jeju. Joining her are Won Hee-ryong, governor of the special self-governing province of Jeju Island, and Park Sang-mee, dean of the Graduate School of International and Area Studies of the Hankuk University of Foreign Studies.

“I welcome the historic statement issued today by the Korean leaders,” Azoulay had tweeted after the inter-Korean summit in the Joint Security Area of Panmunjom on April 27. “My hope is that it paves a way to lasting peace on the Korean Peninsula. UNESCO stands ready to contribute through active cooperation in all its fields of competencies.”

Azoulay is also to speak about Jeju Island and its ties with UNESCO. Jeju Island was designated as a biosphere reserve in 2002 by the organization for having achieved an acknowledgeable level of conservation, sustainable development and logistic support, with locals involved, and for its excellence in education and training regarding sites at the island.

The island was additionally designated a World Natural Heritage site by UNESCO in 2007 and a Global Geopark in 2011. Jeju’s folk ritual, Chilmeoridang Yeongdeunggut, and traditional haenyeo (female divers) culture were also inscribed as Intangible Cultural Heritages by the organization.

The Jeju government plans to submit a proposal to UNESCO next January to establish a research center to be named the Global Research and Training Center for Internationally Designated Areas on the island, with support from UNESCO.

Director-General Azoulay, appointed in November 2017, was formerly the French minister of culture and communication and prior to that, culture adviser to former French President François Hollande. As a graduate of France’s École Nationale d’Administration and of the Paris Institut d’Études Politiques, and with a business administration degree form the University of Lancaster, Azoulay’s career has always been in the sector of culture and communication. She began her career as the head of the Public Broadcasting Sector Office at the Media Development Directorate of France, worked as a legislation expert for the European Commission and held various roles including deputy director general at the French National Centre of Cinematography and the Moving Image.

UNESCO, which stands for United Nations Educational, Scientific and Cultural Organization, was established in 1945 after World War II, when representatives of 44 countries gathered to create an organization “that would embody a genuine culture of peace,” according to the organization. Its mission today is to “reaffirm the humanist missions of education, science and culture.”