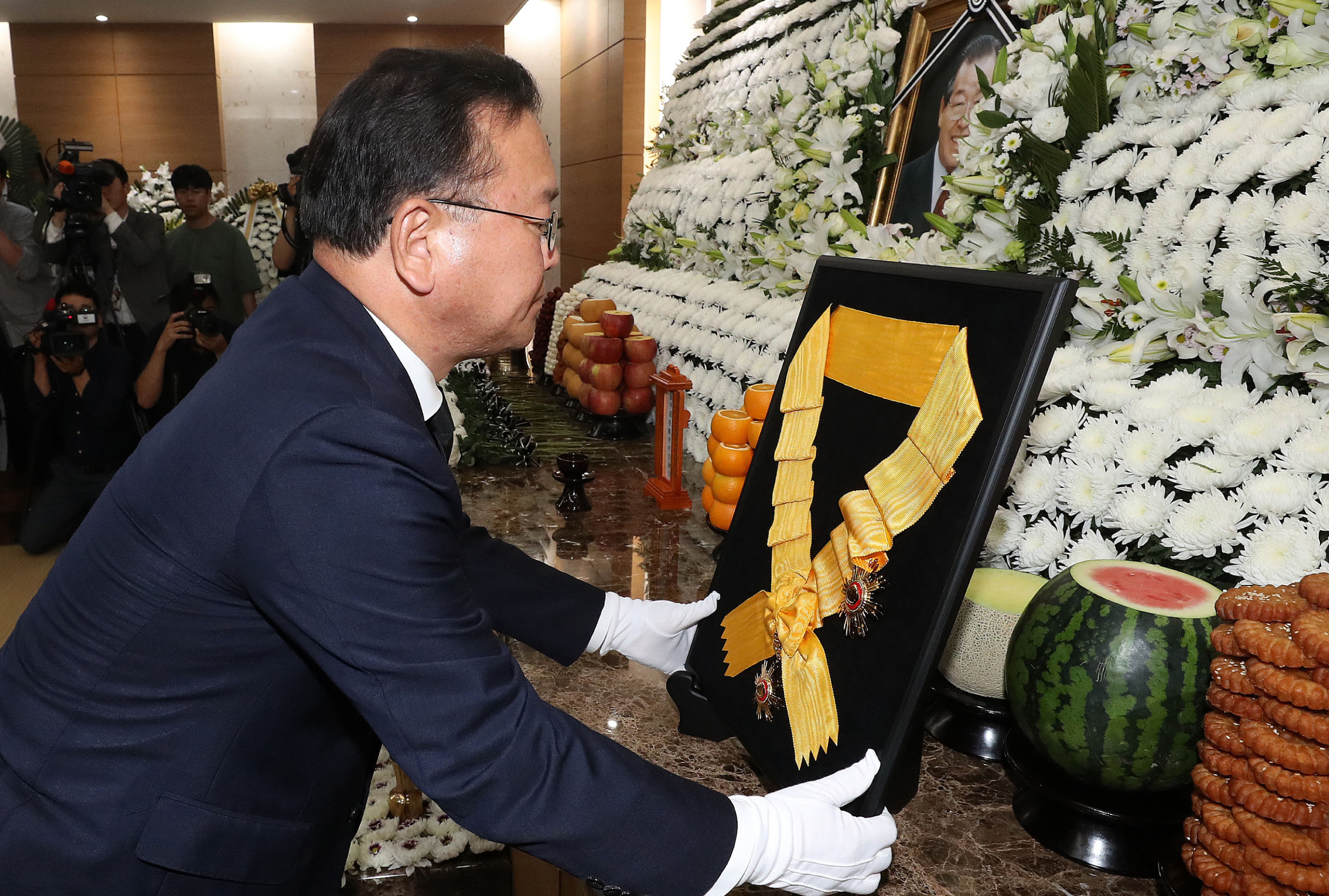 Kim Boo-kyum, minister of the interior, places the Order of Civil Merit’s Mugunghwa Medal on the mourning altar of the late Kim Jong-pil, an influential kingmaker and two-time prime minister, at the Asan Medical Center in southern Seoul on Monday. [NEWS1]

The government on Monday posthumously bestowed the country’s highest civilian honor on Kim Jong-pil, the influential kingmaker and two-time prime minister who died on Saturday. The move immediately drew backlash from liberals who fault Kim for orchestrating a coup that ushered in decades of military dictatorship.

Kim Boo-kyum, the minister of the interior, visited the mourning altar of Kim Jong-pil at the Asan Medical Center in southern Seoul on Monday afternoon and placed the Order of Civil Merit’s Mugunghwa Medal on the altar. President Moon Jae-in, who returned to Seoul on Sunday from a state visit to Russia, asked the interior minister to send his deepest condolences to Kim’s surviving family members, Blue House spokesman Kim Eui-kyeom said.

“The government’s custom and protocol to bestow the Mugunghwa Medal to those who served as prime ministers should be respected,” the interior minister said after placing the medal on the altar. Every prime minister has received the honor after passing away.

The government’s decision to confer the medal on Kim Jong-pil drew opposition from liberal lawmakers and groups on the left who objected to his role in overthrowing a civilian government on May 16, 1961, and helping Park Chung Hee, a military strongman, take power. Kim also created the Korean Central Intelligence Agency, the predecessor of the National Intelligence Service, Korea’s spy agency.

President Moon, who protested Park’s rule as a student, has not personally visited Kim’s altar yet. The funeral is scheduled for Wednesday morning, and whether Moon will visit the altar before then remains up in the air. A senior presidential official, speaking on the condition of anonymity, noted that Moon had never visited an altar for anyone since he was elected in May last year.

The Justice Party, a left-leaning minority party, vehemently opposed Kim receiving the award. While people should pay their respects to the dead, the “historical assessment” of Kim’s achievements and faults is a different matter, the party said.

“The May 16 military coup was a consequential event that overthrew the democratic order of the Republic of Korea that just took its roots,” said Lee Jung-mi, chairwoman of the Justice Party, which has six lawmakers in the 300-member legislature. “Because of the coup, Korean politics suffered decades of darkness and delivered the Korean people deep suffering that has been hard to recover from.”

Meanwhile, she said, the people who fought against Park’s dictatorship have not received their full due.

A petition on the Blue House website calling for the government to rescind the honor has garnered more than 200 signatures as of Monday.

“Those patriotic martyrs who fought for democracy and justice are wailing in their grave,” the petition read. “Do not disappoint those who held up candles,” referring to the candlelight vigils that led to the impeachment and removal of President Park Geun-hye, Park Chung Hee’s daughter, last year. The Blue House said it was aware of the varying opinions of Kim. One senior Blue House official said the decision to bestow the Mugunghwa medal had “taken all views into consideration.”

An influential figure in Korean politics, Kim served as prime minister twice, from 1971 to 1975 under Park Chung Hee and from 1998 to 2000 under President Kim Dae-jung, a political dissident who protested Park.

Kim’s political longevity could be attributed to his support in the swing region of Chungcheong and ability to broker alliances. In 1992, he helped his rival Kim Young-sam win the presidency, and in 1997, he struck a deal with Kim Dae-jung to again allow his rival to become president.

Together, they are known as the “three Kims of Korea” for their outsized role in the country’s modern political history, but Kim Jong-pil was always “the perennial No. 2” for helping figures come to power but never reaching the pinnacle himself.

“Politics is the job of empty-handedness,” he once said, a reflection of his own career as a political kingmaker and his philosophy that politics should confer benefits to the people, not the politician.