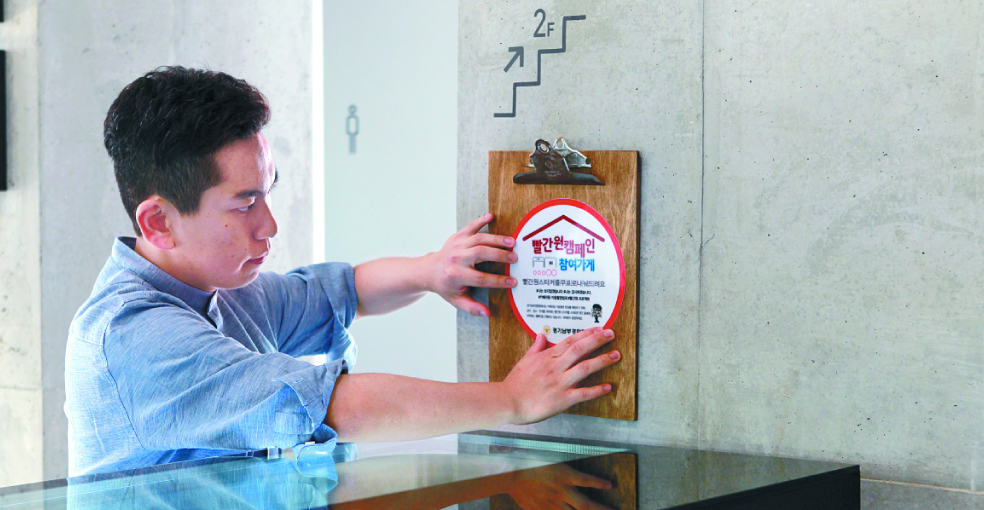 The owner of a cafe puts a sticker on a wall to advertise his participation in the Red Circle campaign. [KIM MIN-WOOK]

Analog Pot, a cafe in the Bundang District of Seongnam, Gyeonggi, has a plate-sized red sticker on its entrance. Its message: this establishment disapproves of molka, or surreptitious filming of people, and has joined a statewide campaign trying to combat it.

Yoo Sang-a, the 30-year-old owner of the cafe, put the sticker on the door on June 18. She was a victim of molka, which she only discovered accidentally. She stumbled upon a video of herself. She says she doesn’t even want to describe it.

In shock, Yoo’s first impulse was to keep the experience to herself. Later she realized that was the wrong course.

“Anyone can be a victim of molka,” she asserted, “and I want to be at least a small factor in stopping it.” She opened the cafe three years ago and later joined the Red Circle campaign against molka, which she considers a kind of uniquely Korean social scourge.

The Korean term molka signifies the filming of someone without their knowledge or consent. The most commonly known type of molka is men filming women unawares with cellphones in public spaces like subways or climbing stairs. But in Korea, it also includes spy cameras fitted permanently in locations like ladies’ bathroom stalls and locker rooms.

Although among friends and close-knit relationships, molka may be a source of humor ­- capturing hilarious facial expressions of unsuspecting peers - but molka has the potential to infringe upon the privacy of people and, in most cases, is intended precisely to do that.

The number of molka cases decreased from 6,462 in 2015 to 4,352 in 2016, according to police, but have exploded this year. There have already been 5,714 cases reported this year - possibly because of greater awareness.

The Red Circle campaign was jointly created by the Gyeonggi Southern Police Agency and a group of students from Kwangwoon University who were alarmed by the trend. They started a communications project named LOUD last September and joined forces with the local police.

The campaign encourages people to put a red, circular sticker around the camera of their mobile phone - a signal that smartphone cameras should be put to good use, not bad. Larger stickers are given to local stores and cafes to show their support.

The campaign’s ultimate goal is to advertise the severity of the issue and shame people into stop filming surreptitiously or watching molkas online.

A store in the Nosong neighborhood in Suwon, Gyeonggi, supports the campaign and has a sign on its entrance that reads, “The Nosong Police will always be near you” - an encouragement to victims and also a warning to perpetrators. The message is accompanied by a friendly, cartoon police officer.

In the midst of crowded and complex streets, the cafe keeps its lights on even after they close.

Owner Kim Do-Kyung, 27, who opened the cafe a month ago in order to “contribute to economic and community activities,” says he leaves its lights on after closing hour. Neighbors say “the streets in the dark seem to have become so much safer because of the lights emanating from the store,” Kim told the Korea Joongang Daily.

To get the stickers, people used to have to go to a police station or request them via the post. To expand its reach, the student government of Anyang University created an organization named SKU and are taking sticker requests via Facebook.

People are comparing the campaign to the anonymous whistleblowing program Crime Stoppers in Canada.

Minister Kim Boo-kyum of the Ministry of the Interior and Safety pledged on his Facebook page that “he will not forgive anyone who gets caught filming without consent from now on. I swear it on my job.”

He wrote that molka is an act that devastates a person’s dignity and is cowardly and weak.

As the campaign progresses, students are emphasizing the severity of the molka threat.

Kim Se-hee, Shim Soo-hyun, Ho In-pyo and Choi Yeon-jae are juniors attending the Seongnam Techno Science High School in Gyeonggi. They are directing a public service announcement telling students how bad surreptitious filming is, even if they think it’s done in jest.

Lee Ki-chang, the director of the Gyeonggi Southern Police Agency, applauds the efforts from concerned citizens. “We will continue to lead efforts from the people to ensure a safe environment for all,” he said.

“Campaigns led by the general public, such as the Red Circle Campaign, do not require much financial support,” said Park Hyun-ho, a professor of police administration at Yong In University, “and they have such a great impact.”