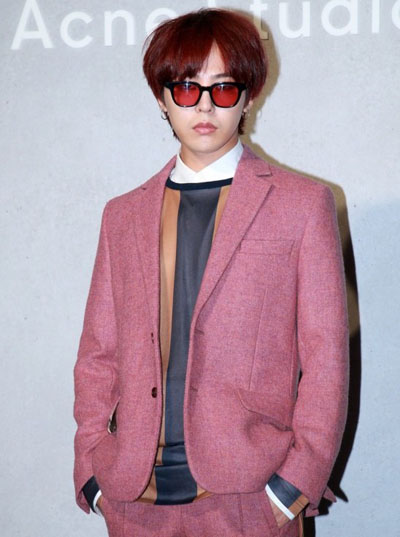 Singer G-Dragon from Big Bang began his mandatory service in February, and though it has only been a few months, he has already found himself mired in controversy. News reports made this week have claimed that the singer has been receiving preferential treatment because of his celebrity status while serving in the army.

According to the stories published, the singer is staying in a special ward at a military hospital usually off-limits to lower-ranking soldiers. Fans claim that such measures are necessary for a famous singer who must always be on the lookout for his safety and privacy, but not everyone agrees.

On Monday morning, local entertainment news outlet Dispatch reported that G-Dragon had been hospitalized after having surgery on his ankle, and was admitted to a single room referred to as the “colonel’s ward.”

The singer’s agency, YG Entertainment, released an official statement on Monday afternoon refuting the report, explaining that that, “G-Dragon is staying in an ordinary one-person’s room, which was a measure taken [by the singer] to prevent any inconvenience to the hospital.” The report was, according to YG, “vicious and untrue.”

Top: G-Dragon poses for a photo after completing basic training in Cherwon, Gangwon, in April. Above: An “observation diary” made by an unknown soldier was posted on Instagram on Monday. [SCREEN CAPTURE]

“The decision came from the medical staff, who saw that it was inevitable not just for stable care of the singer himself but the sake of the other patients staying at the hospital,” said an official from the Ministry of National Defense.

According to Dispatch, the room where G-Dragon is staying is room No. 11 in ward 301, the third floor of the building, which is classified as “colonel’s ward” at the Yangju Military Hospital in Gyeonggi.

Although there is a single-person’s room for lower ranking soldiers, they are only allowed to stay inside rooms located on the sixth floor, even on special occasions. Dispatch posted a picture in which the hospital staff had clearly classified the room as the “colonel’s ward.”

YG Entertainment was unreachable on Tuesday afternoon to comment on the matter.

In addition to the preferential treatment scandal, news broke on Monday night that an unknown soldier had created an “observation diary” about G-Dragon. In it, the solder recorded the details he found out about the singer and sent it to his girlfriend in a handwritten letter. The girlfriend took a picture of the letter and posted it on her Instagram account.

The observations included details such as the location of moles and tattoos on the singer’s body, his shoe size, what time he takes his medication and other habits the singer has regarding his daily life. The author remains unknown as of Tuesday but is assumed to be a soldier staying near G-Dragon’s ward at the same hospital.

The soldier could be sued by the singer, according to experts, but taking legal action could create a series of problems regarding privacy issues for celebrities inside the military.

“Although it might not be punishable by the law, that soldier could be sued for the infringement of one’s personal rights,” said Son Jung-hye, a lawyer from Hyemyeong Law Firm, to JoongAng Ilbo, an affiliate of the Korea JoongAng Daily.

“Too much attention could give a star anxiety issues. But this is the reason why they have to give [celebrities] one-person rooms - to maintain order.”