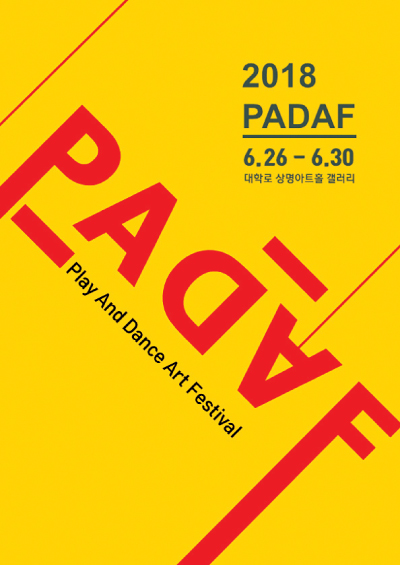 The 2018 Play And Dance Art Festival kicked off yesterday. [PADAF]

The eighth annual Play And Dance Art Festival (Padaf) kicks off this week with another lineup of talented performers. Teams of young musicians, dancers and actors will perform 20- to 30-minute pieces that incorporate elements of visual and performance art.

For the first time in the festival’s history, the works will not be presented in a theater but in an art gallery.

The unconventional exhibition space encourages the audience to walk around and observe the performances from various angles, thus openly rejecting the traditional two-dimensional format of performing arts. The festival hopes to inspire and motivate young artists to question their fields’ most basic assumptions.

“Ambitious young artists couldn’t find a concrete space and the necessary funding to experiment,” says artistic director Yim Hyung-taek. To give young artists more opportunities to interact and exchange ideas, the festival hosted two workshops in March and April prior to the festival’s opening for them to come together and begin thinking corroboratively.

“Because convergence is a very abstract term, young artists best understand what to make out of it with their subversive spirits,” said Yim.

The entries are fittingly impromptu and bold.

Choreographer Kim Jung-un decided to work with her current teammates when they met at the workshop in March. Her team’s entry is a three-act performance inspired by the French novel “Voyage au Bout de la Nuit” by Louis-Ferdinand Celine.

A script was first written based on their collective impressions of the book, and it is then reinterpreted during the performance in the forms of dance, music and film, all simultaneously presented in a singular narrative of tragedy.

The festival focuses not on finalized products but on conversation and constant development. Hence, director Yim is not ashamed of the festival’s early transitory years.

“The early festivals had thematically awkward entries that were ‘experiments for the sake of experimenting.’ With Padaf entering its eighth year, artists now are presenting more coherent works with richly developed motifs.”

The festival will be held at the Sangmyung Art Hall Gallery in Daehangno, central Seoul, until June 30.