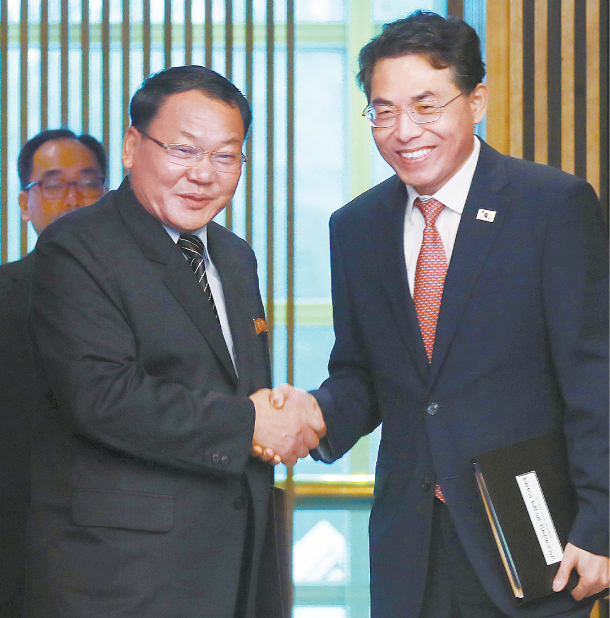 South and North Korea agreed on Tuesday to begin on-site inspections of North Korean railroads in late July, the latest development in the two Koreas’ efforts to reconnect rails on the peninsula and resume cross-border economic exchange.

After a series of meetings that lasted the entire day at the Peace House, a South Korean-controlled building in the border village of Panmunjom, on Tuesday, representatives from the two Koreas decided to launch inspections of the Gyeongui Line, which connects Munsan in the border city of Paju, Gyeonggi, to Kaesong in the North on July 24, followed by an inspection of the Donghae Line on the east coast. The two sides decided to form a special team to conduct the inspection.

The South Korean delegation that attended the meeting was led by Kim Jeong-ryeol, vice transport minister, who was accompanied by Sohn Myung-soo, director general of the railway bureau at the Transport Ministry, and Lee Joo-tae, director general of inter-Korean exchange and cooperation at the Ministry of Unification, which handles relations with the North.

“It’s been a long journey for us to get here but I believe our hearts and determination for inter-Korean railroad cooperation have not changed,” said Kim Yun-hyok of North Korea.

The North Korean vice minister said that developing and linking the railroads from South to North would be a “precursor” that will “lead” to broader inter-Korean economic exchanges.

South Korea’s vice transport minister responded by saying he had a “good feeling” about the meeting.

Ahn Byung-min, head of the northern economic research group at the Korea Transport Institute and a member of the Presidential Committee on Northern Economic Cooperation, explained that modernizing railroads in the North is essential for South Korean trains to operate properly across the border.

This would require on-site inspections of infrastructure in the North, which operates with different standards from the South.

Ahn also said that economic sanctions imposed on North Korea must be addressed before the two Koreas can proceed further.

The discussions were held a decade after South Korea stopped train travel across the border.

According to data by the Ministry of Unification, South Korean trains made 420 trips to the North in 2008 carrying 91.4 tons worth of freight. But North Korea closed its rail connections in December of that year, according to the Unification Ministry.

Tuesday’s meeting was a follow-up to the Panmunjom Declaration from the summit between South Korean President Moon Jae-in and North Korean leader Kim Jong-un in April. Moon and Kim agreed “to adopt practical steps toward the connection and modernization of the railways and roads.”