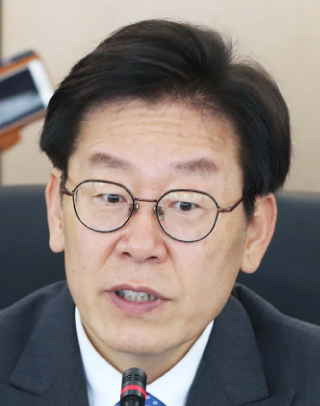 Earlier this month, the two accused Lee of having an affair with the actress from 2007 to 2009, causing a scandal during his campaign for Gyeonggi governor.

Lee’s campaign formed a committee to combat the accusation, which held a press conference Tuesday morning at the Gyeonggi Assembly to refute the claims and explain its reasons for filing the complaint.

At the press conference, Lee’s committee presented evidence they said refuted the allegations. The committee focused on Kim Young-hwan’s accusation that Lee had a tryst with Kim Boo-sun in Oksu-dong, eastern Seoul, between May 22 and 24, 2009, after former President Roh Moo-hyun died.

The committee said that Kim Boo-sun was in Jeju Island from May 23 to 24, while Lee was in Bongha Village in South Gyeongsang on May 23, and referenced photos from blog posts and news articles.

Lee’s committee said that he visited Bongha Village after Roh died on May 23 to pay tribute at the late president’s mourning altar. The committee said the encounter could not have taken place on May 22, as it was before Roh’s death.

“The tryst in Oksu-dong did not happen. Kim Young-hwan and Kim Boo-sun have to take responsibility for their actions,” said Baek Jong-duk, the co-head of the committee.

The committee concluded its press conference with a picture of Lee mourning Roh’s death with other politicians in Bongha Village on May 23 and in Seongnam, Gyeonggi, from May 24 to 29.

According to an insider, “Lee wanted to stay away from negative campaigning, but filed complaints in the belief that this kind of ‘decadent politics’ should be exterminated.”

The Bareunmirae Party filed complaints against Lee on June 7, claiming that he was lying. Kim Young-hwan also held a press conference Tuesday afternoon, and told Lee to “stop hiding behind other people and sue [him] and Kim Boo-sun by himself.”

Kim added that “not only the ethics of Lee, but also those of progressives, are being tested.”