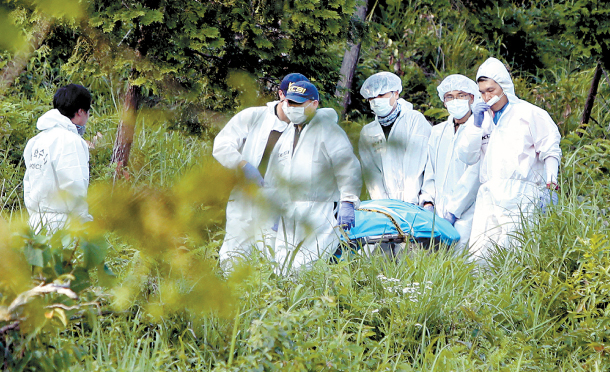 A DNA test confirmed that a corpse found Sunday on a hilltop in Gangjin County, South Jeolla, was the female high school student who went missing over a week ago. But investigators are still baffled over many aspects of the case — particularly why she was killed.

The highly decomposed body was found by a police dog after an eight-day search operation by police on the summit of a steep hill near where the last signal from the girl’s cellphone was detected.

Stripped of all clothing and with its hair cut off, the body showed no signs of external injury according to a preliminary autopsy released on Monday. The poor state of the corpse made it impossible to determine its identity or cause of death.

DNA results released Monday night, however, showed the DNA of the corpse matched a sample taken from the missing girl’s toothbrush. Moreover, the handle of a sickle found in the trunk of a car owned by the prime suspect — a friend of the girl’s father surnamed Kim — contained traces of a liquid that matched the missing girl’s DNA. The liquid is not blood, but is more likely saliva or sweat, according to police.

The 16-year-old girl, whose name has not been disclosed, was a high school freshman living with her parents in Gangjin County. She went missing on the afternoon of June 16 after telling a friend through Facebook that she was going to Haenam County because a friend of her father wanted to help her find a part-time job.

The friend of her father committed suicide following a host of suspicious activities the next day. Police believe his apparent suicide was prompted by fears that authorities were hot on his trail.

At around 2 p.m. on June 16, the girl sent the friend a Facebook message saying she was going with her father’s friend to look for a job and left home. Kim, who lived nearby in the same county, was parked about 600 meters (1,968 feet) away from her house, according to surveillance footage.

Surveillance footage shows Kim’s car back at his home in Gangjin County by 5:35 p.m. Other footage shows Kim cleaning his car at around 5:50 p.m. and burning what appears to be articles of clothing. Investigators believe he may have been trying to get rid of evidence.

When the girl’s mother went to Kim’s house that evening to ask about her whereabouts, he hurriedly fled through the back door. The next morning at 6:17 a.m., he was found hanged in a construction site near his house.

Kim was familiar with the hill where the body was found; he spent his childhood there and his parents’ graves are located nearby. The spot may have been chosen after careful deliberation.

Nonetheless, the steep ascent to the summit — slanted at almost 70 to 80 degrees — has baffled investigators who do not believe Kim, weighing 68 kilograms (150 pounds), could have carried the 70-kilogram girl up the hill after murdering her. Police have determined that it takes around 20 to 30 minutes for a healthy adult to reach the summit from the base of hill, but Kim was not on the scene long enough to have carried a heavy load up the hill by himself that day. Kim’s car was confirmed by surveillance footage to have been parked for only two hours and 40 minutes near a spot at the hill’s base.

Police have not ruled out the possibility of an accomplice, but no evidence has emerged to support the idea. Forensic investigators have so far come up with two scenarios for how the murder may have taken place. Kim, who operated a restaurant that served dog meat, may have lured the girl into the wooded hills under the pretense of picking berries and herbs as a part-time job. This may explain why a sickle was present.

The other possibility may be that the girl ran up to the summit of the hill in flight from Kim, who may have threatened her with the sickle. He could have killed her near the place where her body was discovered.

Heavy rainfall that began on Tuesday is hindering further search operations by police, who are looking for the girl’s cellphone and further evidence that could link her to Kim. The only piece of evidence in custody so far is a small tube of lip gloss that was found next to the girl’s body.

An additional and more thorough autopsy is currently in the works to discover the cause of death, which remains unknown. The possibility of poisoning has also been raised by investigators. Results are estimated to be released in two weeks.