Heavyweights face off at KPMG Championship

Heavyweights face off at KPMG Championship 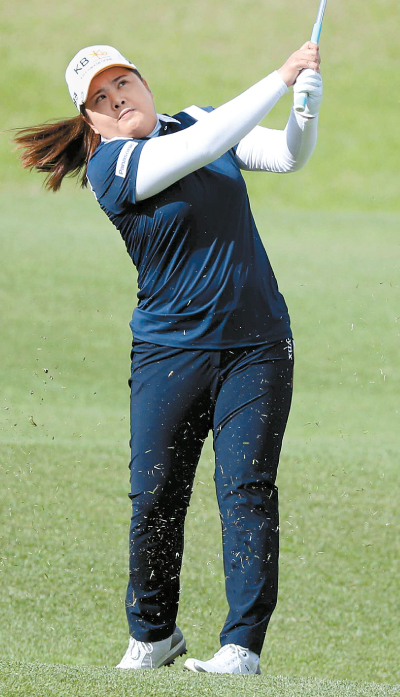 Park In-bee watches her shot during the final round of the 2018 Doosan Match Play Championship at Ladena Resort in Chuncheon, Gangwon on May 20. [KLPGA]

The stakes are high at the KPMG Women’s PGA Championship, the LGPA Tour’s third major tournament of the season, as the top two golfers in the world will face off in the same group for the opening rounds.

Park In-bee, the current No.1 in the women’s world ranking, will play alongside No. 2 Ariya Jutanugarn of Thailand, who won the 2018 U.S. Women’s Open, and Danielle Kang, the defending champion. If Jutanugarn wins the tournament this weekend, she could reclaim the top spot in the world ranking and will take home her second major title of the season.

Jutanugarn is off for another great season, as she is the current leader of the LPGA Tour’s Player of the Year standings and is the money leader.

Though Jutanugarn is continuing her success this season, Park won’t easily give away the top spot, as she has been a strong player in the KPMG Women’s PGA Championship. Park won the tournament for three straight years starting in 2013. Only three players ? Park, Annika Sorenstam of Sweden and Patty Berg of the United States ? have won a major title for three straight years. Park has been ranked as the top women’s golfer for the past 10 straight weeks.

This week, Park is eager to add another major title to redeem herself after a disappointing playoff loss to Pernilla Lindberg of Sweden at the ANA Inspiration in April. The sudden-death playoff round lasted eight holes, and the champion was determined the next day, as the playoff had to be postponed due to darkness.

Park, who missed most of the last two seasons, has had a successful comeback this season. She won The Bank of Hope Founders Cup in only in her second competition of the LPGA season, and reclaimed the top spot in the rankings in April. Park finally won her first-ever KLPGA Tour event at the 2018 Doosan Match Play Championship in May before competing at the U.S. Women’s Open.

In 2017, Kang finally picked up her first LPGA Tour title at the KPMG Women’s PGA Championship. Kang will also have to play well this weekend for her chance to represent the United States at the UL International Crown. Lexi Thompson is currently the highest ranked player for Team USA, at third, and Kang is fifth, behind Michelle Wie.

As Kang is five spots behind Wie in the world ranking, Kang will need at least a runner-up finish this weekend to play for her country at the upcoming international tournament.

KPMG is both an LPGA Tour major tournament and the last opportunity for some players to bring up their world rankings before the final rosters for the UL International Crown in October are announced. The biennial team match tournament on the LPGA Tour features eight national teams, with four golfers representing each country.

In the most recent world ranking, released on Monday, Choi Hye-jin is ranked fourth among Korean golfers, at seventh. Kim In-kyung is right behind Choi at eighth. Since Choi is a full-time member of the KLPGA Tour, she will not be competing at the KPMG Women’s PGA Championship this weekend.

Ryu So-yeon, who won the Meijer LPGA Classic in June, will play the first two rounds, along with Lydia Ko of New Zealand and Thompson.

Park Sung-hyun, who won the Volunteers of America LPGA Texas Classic in May, will play the first two rounds, along with Mo Martin of the United States and Yani Tseng of Taiwan. After a victory in May, Park had been struggling this season, missing three cuts. Last week, Park finally made the cut, finishing tied for 61st at the Walmart NW Arkansas Championship presented by P&G.

All four rounds of the KPMG Women’s PGA Championship will be broadcast live on JTBC Golf.