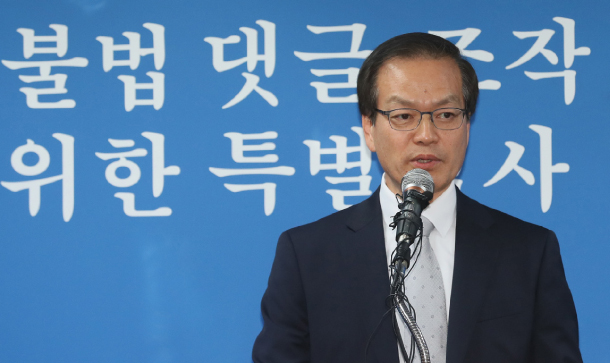 Huh Ik-bum, the independent counsel leading a special probe on the so-called Druking case, delivers a briefing on the investigative team’s plan at his office in Seocho District, southern Seoul, on Wednesday. [YONHAP]

A special counsel team began its investigation on Wednesday of a political scandal involving influential members of the ruling party and alleged efforts to influence public opinion in their favor by manipulating comments on social media.

The team, led by former prosecutor Huh Ik-bum, has 90 days as part of its mandate to get to the bottom of what has become Korea’s own “fake news” case.

In March, authorities arrested Kim Dong-won, a power blogger known online as Druking, for instructing associates in his online community to use software that posted comments against President Moon Jae-in and “liked” them to artificially boost views and give the impression that one opinion dominated.

The act was alleged retaliation against the Moon administration for denying patronage posts to Druking’s associates after they helped him get elected.

Before Moon’s election, the members of the online community were part of the Democratic Party and supported Moon’s campaign. Now, the independent counsel is trying to figure out how involved Democratic Party leaders were in this online manipulation and whether the party directly ordered the campaign.

The special counsel team includes 13 prosecutors who will act independently from the prosecutors’ office. Huh vowed a thorough probe through “objective collection of evidence and analysis” in a “quiet manner.” However, he said individual politicians would not be targeted, stressing that the investigation would be “guided by evidence.”

In recent months, two names - Kim Kyoung-soo, the governor-elect of South Gyeongsang, and Song In-bae, President Moon’s secretary for political affairs - have emerged as persons of interest in this case. Both are close allies of Moon, and both had contact with Druking. Huh’s team could summon them for questioning in the coming weeks.

Opposition parties which pushed for the special counsel probe suspect Song was aware of Druking’s illegal activities. Compounding such suspicions is the fact that Song introduced Druking to Kim.

Song did meet Druking four times before last year’s presidential election and brought Kim to one of the meetings, the Blue House found in its internal investigation. He received a total of 2 million won ($1,790), which was given to him over two meetings as an honorarium, but the Blue House dismissed the encounter as harmless.

“It is normal for campaign members to meet lots of people during election season,” Kim Eui-kyeom, a Blue House spokesman, said. “Song was simply doing that in bringing Kim Kyoung-soo to the meeting. We found that Song did not meet with Druking after the election, so that was the end of the Blue House’s investigation.”

Kim and Song have both denied their involvement in Druking’s scheme, and the months-long scandal has had little effect on their political fortunes. Kim won the governor’s seat earlier this month by a wide margin, and Song was named the political affairs secretary on Tuesday, indicating President Moon’s continued trust in his longtime aide.

The special counsel has 60 days to conduct its probe and can request 30 more days from Moon. Huh said he would not hold briefings every time something important comes up in the case since the nature of his investigation does not warrant such briefings.