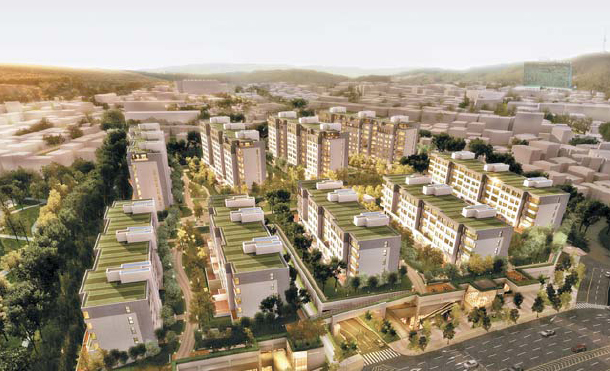 A computer rendered overview of Nine One Hannam. [DS HANNAM]

The apartments at the luxurious Nine One Hannam complex were scheduled to fetch the highest preconstruction sales price ever in Korea.

But earlier this month, the complex in Hannam-dong, central Seoul, decided to rent out its units rather than sell them, and they’re available starting Monday,

Nine One Hannam was built by DS Hannam, an affiliate of Daishin F&I. The complex has 341 units with lease deposits that range between 3.3 billion won and 4.8 billion won. Monthly rents stars at 700,000 won and can reach as high as 2.50 million won.

The tenant can purchase the apartments after leasing them for four years.

Initially, DS Hannam was planning to sell the apartments for 63.6 million won per 3.3 square meters, which would have been an all-time record for preconstruction sales. However, this met with opposition from the Korea Housing and Urban Guarantee Corporation (HUG) in January.

It decided not to guarantee the sales, as it said the presale prices were too high. HUG said it could only approve the sales if the apartments sold for around 47 million won per 3.3 square meters.

Any apartment project with more than 30 units needs to get a preconstruction sales guarantee from HUG. It has refused presales where the price exceeds 110 percent of the average presales or actual sale prices of neighboring apartments.

Now, Nine One Hannam would only be able to collect 1.35 trillion won, which is a huge loss, as the construction project cost 1.4 trillion won. If it was sold for 63.6 million won per 3.3 square meters, the project could have made 1.7 trillion won, resulting in a profit of 300 billion won.

DS Hannam decided to instead lease the apartments and sell them to the tenants four years later. They will not need the approval of HUG to do so.

It is a gated community, which is unusual in Korea. Each apartment has its own exclusive elevator. They units feature high ceilings that range from 2.45 to 2.6 meters. Nine One Hannam also has its own swimming pool, clubhouse, fitness center, community library, private party room and guesthouse.

“[Nine One Hannam] is not only close to the Han River, but it is located in a central area between Gangnam and Gangbuk [South and North of the Han River] and surrounded by an exquisite environment, including the Yongsan Park and Namsan mountain,” said an official in charge of accepting rental tenants.