KIM HAN-BYUL
*The author is head of the digital contents lab at the JoongAng Ilbo. 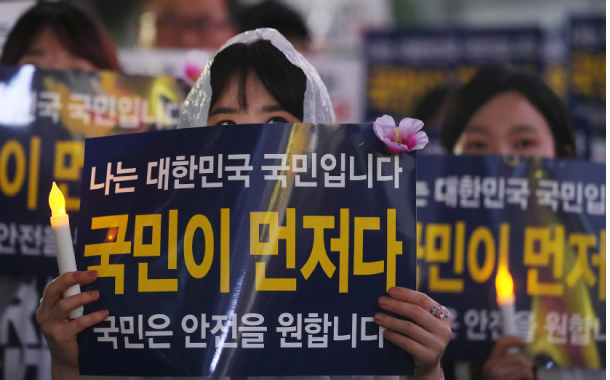 Protesters stage a rally in central Seoul Saturday to protest the acceptance of Yemeni asylum seekers on Jeju Island. [YONHAP]

More than 500,000 people signed the Blue House’s petition to scrap the Refugees Act. The petition demanded that public order, safety for citizens and other concerns should be prioritized over refugee rights. The petition opposes letting Yemeni asylum seekers in Jeju stay in Korea.

The concerns are also found in online posts. According to Google Trends, those who searched “refugees” in the past one week also looked up “refugee crimes,” as well as “Yemen” and “Islam.” “Elin Krantz” and “Taharrush video” also ranked highly.

Who is Elin Krantz? She was a Swedish woman who was raped and murdered by an Ethiopian Muslim refugee. Taharrush is known as a “group rape game” among Muslims. Another notable case was mass sexual assaults against dozens of women by Muslim refugees from North Africa in Cologne, Germany, in 2015.

However, the story that Elin Kranz was raped and murdered by a Muslim refugee is not true. The Swedish Embassy in Korea clarified that Ephrem Yohannes, who was convicted in the 2010 incident was a Christian, not Muslim.

He was from Ethiopia, but before moving to Sweden, he lived in the United States. At the time of the crime, he was living in Sweden with a work permit through a migrant workers employment program.

Bak Hyun-jung, the director of public relations at the Swedish Embassy in Korea, said that Swedish people were enraged by the cruel murder of Elin Krantz, but there was little anti-Muslim sentiment. She added that the far-right Sweden Democrats were criticized for linking the incident with their anti-immigration agenda.

The Swedish media did not mention the origin, religion or ethnicity of the offender when reporting on the case.

It was American far-right websites that posted the gruesome picture and argued that the United States should learn from Sweden’s example. These posts have been translated into Korean and are spreading.

The meaning of “taharrush” is also a mistranslation. Taharrush jamai in Arabic, or taharrush gamea in the Egyptian dialect, means “mass harassment.” Pastor Kim Dong-moon, who majored in Arabic and worked as a missionary in the Middle East, said that “gamea,” which means “group,” was mistranslated into “game.”

He argued that describing taharrush as a mass rape game in the Middle East, and even the Islamic world, was distorting facts. It is fair to condemn the Cologne incident as a heinous sexual assault, but it is not a common practice in Islamic culture.

Public order and safety are important, and refugee screening must be strict and thorough. But the premise for all this must be logical judgment based on facts. We should not be swayed by vague fears incited by fake news.