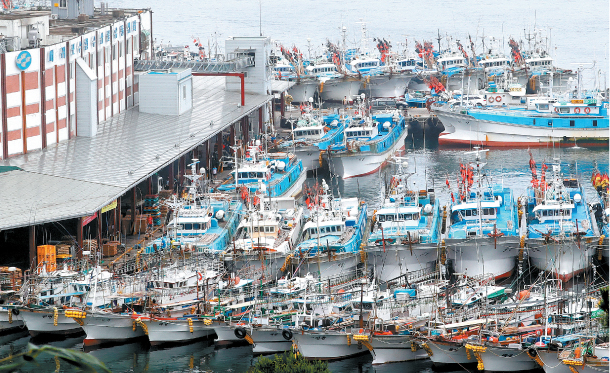 Fishing vessels anchored at Seogwipo Port in southern Jeju Sunday brace for Typhoon Prapiroon, which is expected to affect the island as early as today amid ongoing monsoon rains nationwide. Weather authorities expect the typhoon will pass through southern Korea on Tuesday before heading toward the East Sea. [NEWS1]

As worries about an incoming typhoon loom, flights were canceled, residents were evacuated and inauguration ceremonies for newly elected politicians were postponed over the past weekend as heavy rain soaked Korea.

The Korea Meteorological Administration (KMA) issued heavy rain alerts for the central and southern parts of the country Sunday and said the central provinces will likely see 50 millimeters (1.9 inches) of rain an hour until today.

The southern Jeolla and Gyeongsang provinces weren’t expected to have as much rainfall today as Sunday, but will still get some rainfall throughout the day, according to the agency.

The KMA estimated that Korea will receive between 100 to 250 millimeters of rain on average from Sunday through Tuesday, while areas in Seoul, Gyeonggi, western Gangwon, the southern coast and around Mount Jiri in the inland south were expected to be hit with at least 300 millimeters of rain.

Typhoon Prapiroon is expected to pass by Jeju Island on Tuesday morning and hit Korea’s southern coast later that day. The tropical cyclone was heading north from Okinawa, Japan, on Sunday at 27 kilometers (17 miles) per hour. The KMA expected Prapiroon would bring strong winds and heavy rainfall, and tides in the South Sea on Tuesday afternoon could reach as high as 7 meters (23 feet), the agency said.

A KMA spokesperson said Prapiroon may bring “massive damage” to the country this week because the recent heavy rainfall has already weakened the soil. The Gyeongsang regions will likely face the worst damage because they are expected to fall inside the typhoon’s “dangerous semicircle,” which has the strongest winds. The typhoon will pass through Daegu and travel northeast before heading to the East Sea on Tuesday night, according to the KMA.

Vehicles are submerged in muddy floodwater in Boseong County, South Jeolla, on Sunday. Heavy rains caused mudslides and flooded roads, and a middle school was also inundated by water. [NEWS1]

Korea’s southern regions saw the heaviest rainfall Sunday, as farmers and residents complained of flooding in several areas. In Haenam, South Jeolla, which has been soaked since last Tuesday, at least 20 houses and a local community center were flooded. The houses were almost drained by Sunday afternoon, local authorities said, but some residents were evacuated to nearby community centers. In nearby Sinan, South Jeolla, about 20 houses were flooded as well.

A 74-year-old man was also reported missing near a bridge in Gwangju, and police were conducting a search operation Sunday using helicopters.

Across eight cities and counties in South Jeolla, the rain flooded about 7,000 hectares (17,300 acres). Work is underway to drain the affected areas, the South Jeolla provincial government office said.

In Yeongdo County in Busan, three residents had to seek shelter at motels or with family members, as their houses were damaged by rain, according to local officials.

At least 10 flights out of Gimpo International Airport in Gangseo District, western Seoul, were canceled, as were eight in Ulsan Airport. At least 383 trails in 13 national parks across the country, including on Mount Jiri and Mount Naejang, were closed to hikers. The Cheonggye Stream in central Seoul has been off-limits since Saturday.

Prime Minister Lee Nak-yon, who was briefed on Typhoon Prapiroon Sunday at the National Disaster and Safety Status Control Center in central Seoul, asked local authorities to keep an eye out for any possible emergencies until the typhoon leaves Korea.

In South Jeolla, the mayor of Mokpo as well as the county chiefs of Haenam and Boseong, decided not to hold inauguration ceremonies this week, and instead presided over emergency briefings Sunday to discuss the damage inflicted on their respective areas.

A 73-year-old woman in Boseong injured her ankle Sunday morning after a mudslide hit her house. Over 50 cars in the underground parking lot of a nearby apartment complex were also affected by the mudslide.

On Jeju Island, a guesthouse in Jeju City was flooded Saturday morning, while a library in Seogwipo faced the same fate later the same day. Other cases of flooding were reported on Udo Island, located off the northeastern coast of Jeju, where officials said several houses and guesthouses were affected.

Coast Guard officials in Jeju advised boats to stay at their ports and told operators of water leisure facilities to secure their equipment on land.