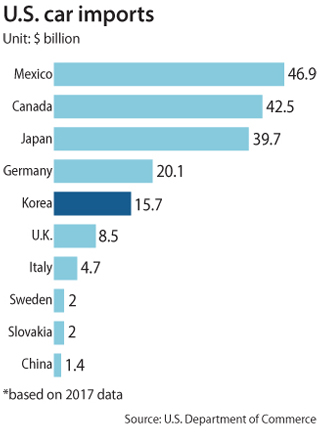 The Korean government and local automakers have been sending representatives to Washington after U.S. President Donald Trump proposed tariffs of up to 25 percent on imported cars and auto parts.

In a hurriedly arranged briefing on Monday, the Ministry of Trade, Industry and Energy said it was ramping up efforts to help Korea’s bread-and-butter auto industry. Last week, Minister Paik Un-gyu visited Washington and met with U.S. lawmakers including Rep. Ed Royce of California, who chairs the House Foreign Affairs Committee, and Senator Johnny Isakson of Georgia, home to a Kia Motors plant.

The ministry also submitted a written statement to the U.S. Department of Commerce on June 29. In it, the ministry explained that Korean automakers were not in direct competition with U.S. companies because they focus on selling smaller vehicles in the U.S. market while U.S. automakers mostly sell bigger cars like sports utility vehicles. The ministry also said the tariff would undermine the U.S. economy as whole.

A public hearing is scheduled for July 19 and 20. The Korean government plans to send a delegation led by Kang Sung-chun, the deputy trade minister, to the hearing.

During his visit to Washington last week, Minister Paik argued a recent revision to the Korea-U.S. free trade agreement eliminated any threats that Korean companies might pose to the U.S. economy and national security.

The amendment, made in March this year, pried open the Korean auto market to U.S. carmakers, doubling the number of U.S.-made vehicles that could be sold in Korea without having to meet Korean safety guidelines.

From late May, the U.S. Department of Commerce has been investigating whether imported cars pose a threat to national security, the same argument it used to impose steel tariffs earlier this year. Should the investigation prove car imports harm U.S. security, tariffs could soar to as high as 25 percent from the current 2.5 percent.

Hyundai Motor and Kia Motors, the two largest Korean automakers, face the most risk from higher tariffs. They also submitted written comments on June 29 and were joined by other automakers including General Motors and Toyota.

In its statement, Hyundai emphasized that high tariffs could actually take away jobs from Americans. The automaker predicts that the stiff tariffs will lead to an average 10 percent increase in annual production costs at Hyundai and Kia factories in the United States and subsequently lead to higher price tags on cars. Rising prices will then lead to poor car sales, less profitability in their U.S. business and ultimately layoffs, the automaker argued.

Hyundai Motor and its affiliate Kia Motors contribute to roughly 135,000 jobs in the United States, according to the automakers.

Groups in the United States have also opposed the tariffs. The Alliance of Automobile Manufacturers, which lobbies for automakers with business in the United States, estimates consumers might see an average price increase of $5,800 due to the 25 percent import tariffs.

U.S. automaker General Motors warned the higher tariffs would lead to a “smaller GM” with “reduced presence at home and abroad” in its comment to the Commerce Department on Friday. The tariffs will ultimately lead to less investment, fewer jobs and lower wages for employees, the automaker said.

Meanwhile, Hyundai Motor faces a labor battle at home after wage negotiations with its union fell through last month. On Monday, the union began voting on whether to go on strike.

However, the company offered a 35,000 won raise and bonus of 200 percent the monthly wage plus a million won per employee.

If the labor union walks out, it will be their seventh consecutive year of striking over wage negotiations.